The Leopard gecko, also known as the Panther gecko or the Common Leopard gecko, is a medium-sized lizard of the genus "Eublepharis". They can be found in the southern part of Central Asia, Afghanistan, Pakistan, northwest India, and parts of Iran; living mostly in dry rocky regions, dry grasslands and deserts.

Leopard geckos are around 7-9 inches (17.8-22.9 cm) long, with large heads, big eyes with oval-shaped pupils, thin toes, and, unlike other reptiles, they have eyelids. They have thick tails that narrow to a point and, like their bodies and heads, are slightly flattened from top to bottom. Most of their scales are small and rough. Spaced rows of larger, bumpy scales give them a knobby, rough look, but they are actually soft when touched. Baby Leopard geckos are 85 mm long when they hatch, and when they hatch they have dark bands which go around their bodies.These bands lighten as the babies grow into adults which have spots instead of bands. Leopard geckos are normally lavender or yellow in colour, but pet Leopard geckos come in different "colour morphs" like albino, "Banana blizzard", "Blizzard", "Ghost", "High Yellow", "Hyper Xanthic", "Jungle", "Leucistic", "Normal" or "Wild", "Patternless", "Red-stripe", "Snow", "Tremper Albino" and many more.

Like many lizards, the Leopard gecko has a tail that breaks off when grabbed by a predator. The tail breaks at a crack in the vertebra, and the surrounding muscles are arranged so that they separate neatly and instantly. A muscle closes around the artery in the tail at the point of the break and stops blood loss. Normally a new tail grows back. This method helps the Leopard gecko to escape when attacked. 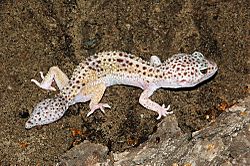 A Leopard gecko that has lost and grown back it's tail

The Leopard gecko is found in dry rocky regions, dry grasslands and deserts of southern Central Asia, Afghanistan, Pakistan, northwest India, and parts of Iran. The temperatures of these areas during winter can be quite low, below 10 °C (50 °F), forcing the animals underground into semi-hibernation, called brumation, and they live on fat reserves. Leopard geckos are crepuscular reptiles; during the day they hide in burrows, but they are active at dawn and dusk when the temperature is favorable. 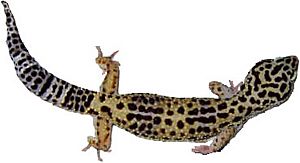 Leopard Geckos are friendly, docile creatures by nature, but they sometimes bite. If held in a human hand they will only bite if they mistake a finger for food, or if the person is holding the gecko too tightly.

Leopard geckos can lay up to five clutches of one or (usually) two eggs during the five month breeding season, and may use some of the stored sperm to fertilize each clutch. The eggs hatch after around 55 days.

There are five subspecies of the Leopard gecko:

All content from Kiddle encyclopedia articles (including the article images and facts) can be freely used under Attribution-ShareAlike license, unless stated otherwise. Cite this article:
Leopard gecko Facts for Kids. Kiddle Encyclopedia.