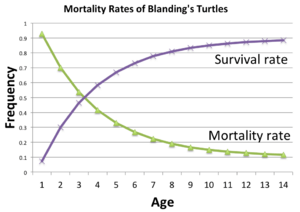 Blanding's turtle (Emys blandingii or Emydoidea blandingii) is a North American turtle; it mainly lives near and south of the Great Lakes.

The Blanding's turtle is characterized by its dark dome shaped upper shell, also known as the carapace, and its distinct bright yellow neck. The dark shell of the turtle is often scattered with yellow specks. The Blanding’s turtle is commonly referred to as a semi-box turtle due to its bottom shell, known as the plastron, which is hinged across the front third. The hinge going across the shell allows the turtle to pull the front of the plastron strongly against the top half of the shell helping it to hide when threatened.

The Blanding’s turtle lives in wetland areas with shallow waters-such as rivers and streams- that are near sandy uplands. These wetland areas support the turtles with their rich, aquatic vegetation.

Blanding’s turtles are known to live in the Upper Midwest, New England, and Southeastern Canada regions.

Blanding’s turtles tend to spend the winter months in the muddy areas of deep marshes, backwater pools, ponds and streams. But in early spring they come out and move to temporary wetlands that allow for mating and breeding habitats. Mating will typically occur around early evening, but can go on until late night. They become sexually mature around the age of 12 years. When breeding, they breed only once a year and they typically have an egg clutch of about 10-26 eggs.

Eggs are laid far from water in preferably sandy areas. The hatchlings leave the nest starting around mid-August to early October. Blanding’s turtles have a life expectancy of over 70 years.

All content from Kiddle encyclopedia articles (including the article images and facts) can be freely used under Attribution-ShareAlike license, unless stated otherwise. Cite this article:
Blanding's turtle Facts for Kids. Kiddle Encyclopedia.