Australian ringneck, the broad-tailed parrot species Barnardius zonarius, is a bird native to Australia. Except for extreme tropical and highland areas, the species has adapted to all conditions. Treatments of genus Barnardius have previously recognised two species, the Port Lincoln parrot (Barnardius zonarius) and the mallee ringneck (Barnardius barnardi), but due to these readily interbreeding at the contact zone they are usually regarded as a single species B. zonarius with subspecific descriptions. Currently, four subspecies are recognised, each with a distinct range.

In Western Australia, the ringneck competes for nesting space with the rainbow lorikeet, an introduced species. To protect the ringneck, culls of the lorikeet are sanctioned by authorities in this region. Overall, though, the ringneck is not a threatened species.

The subspecies of the Australian ringneck differ considerably in colouration. It is a medium size species around 33 cm (11 in) long. The basic colour is green, and all four subspecies have the characteristic yellow ring around the hindneck; wings and tail are a mixture of green and blue. 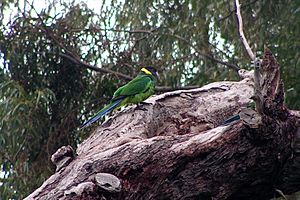 The B. z. zonarius and B. z. semitorquatus subspecies have a dull black head; back, rump and wings are brilliant green; throat and breast bluish-green. The difference between these two subspecies is that B. z. zonarius has a yellow abdomen while B. z. semitorquatus has a green abdomen; the latter has also a prominent crimson frontal band that the former lacks (the intermediate shown in the box has characteristics of both subspecies). The two other subspecies differ from these subspecies by the bright green crown and nape and blush cheek-patches. The underparts of B. z. barnardi are turquoise-green with an irregular orange-yellow band across the abdomen; the back and mantle are deep blackish-blue and this subspecies has a prominent red frontal band. The B. z. macgillivrayi is generally pale green, with no red frontal band, and a wide uniform pale yellow band across the abdomen.

The Australian ringneck was first described by English naturalist George Shaw and drawn by Frederick Polydore Nodder in the 1805 in their work The Naturalist's Miscellany: Or, Coloured Figures of Natural Objects; Drawn and Described Immediately From Nature. He called it Psittacus zonarius "zoned parrot". A broad-tailed parrot, it is most closely related to the rosellas of the genus Platycercus, and has been placed in that genus by some authorities, including Ferdinand Bauer.

Pre-existing names for the species, derived from the Nyungar language of Southwest Australia, are dowarn [pronounced dow’awn] and doomolok [dorm’awe’lawk]; these were identified from over one hundred records of regional and orthographic variants to supplement the names already suggested by John Gilbert, Dominic Serventy and others.

Currently, four subspecies of ringneck are recognised, all of which have been described as distinct species in the past: (As of 1993, the Twenty-eight and Cloncurry parrot were treated as subspecies of the Port Lincoln parrot and the mallee ringneck, respectively.)

The classification of this species is still debated, and molecular research by Joseph and Wilke in 2006 found that the complex split genetically into two clades—one roughly correlating with B. z. barnardi and the other with the other three forms; B. z. macgillivrayi was more closely related to B. z. zonarius than to the neighbouring B. z. barnardi. The researchers felt it was premature to reorganise the classification of the complex until more study was undertaken.

The Australian ringneck is active during the day and can be found in eucalypt woodlands and eucalypt-lined watercourses. The species is gregarious and depending on the conditions can be resident or nomadic. In trials of growing hybrid eucalypt trees in dry environments parrots, especially the Port Lincoln parrot, caused severe damage to the crowns of the younger trees during the research period between 2000–3.

This species eats a wide range of foods that include nectar, insects, seeds, fruit, and native and introduced bulbs. It will eat orchard-grown fruit and is sometimes seen as a pest by farmers.

Breeding season for the northern populations starts in June or July, while the central and southern populations breed from August to February, but this can be delayed when climatic conditions are unfavourable. The nesting site is a hollow in a tree trunk. Generally four or five white oval eggs are laid measuring 29 mm x 23 mm, although a clutch may be as few as three and as many as six. Fledgling survival rates have been measured at 75%.

In Western Australia, a licence is required to keep or dispose of more than four Port Lincoln ringnecks. All four subspecies are sold in the Canary Islands and in Australia, and they are traded via the CITES convention. The sale of the Cloncurry parrot is restricted in Queensland. The Australian ringneck can suffer from psittacine beak and feather disease, which causes a high nestling mortality rate in captivity.

All content from Kiddle encyclopedia articles (including the article images and facts) can be freely used under Attribution-ShareAlike license, unless stated otherwise. Cite this article:
Australian ringneck Facts for Kids. Kiddle Encyclopedia.