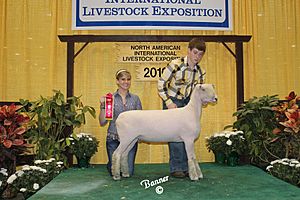 An American Southdown fall ewe at the NAILE Livestock show 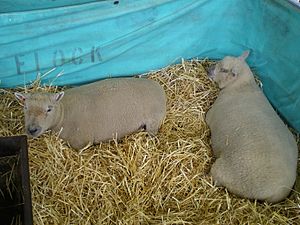 Not to be confused with the Olde English 'Babydoll' Southdown sheep.

The Southdown is a small, dual-purpose English sheep, raised primarily for meat. The Southdown breed was originally bred by John Ellman of Glynde, near Lewes, East Sussex, about 200 years ago. His work was continued by Jonas Webb of Babraham in Cambridgeshire, who developed the larger animal of today. It was exported to New Zealand and was used in the breeding of the Canterbury lamb.

This sheep was involved with crossbreeding to develop other breeds:

The Southdown in Britain is recognised by the Rare Breeds Survival Trust as a native breed, although today it is popular amongst the smaller scale breeders of sheep.

It has been split into two sub-breeds. The Southdown raised by commercial growers today, is larger than the "traditional" Southdown of years past. North American Southdowns are also taller than their English counterparts. The original blood line of the English Southdowns are the Olde English 'Babydoll' Southdown sheep in the US. They have been selected specifically for their smaller size of the original blood lines and a focus on wool and hobby breeding rather than commercial meat production. In California and New Zealand, they are placed in vineyards to graze weeds because they are too short to reach the grapes on the vines. Baby Doll breeders claim that their sheep are closer to the original English Southdown than are the commercial Southdown sheep being grown today.

An estimated 110,000 sheep were in Sussex as early as 1341. At the time, their wool was second only to the Hereford sheep in fineness and quality.

In 1780, John Ellman realized the potential of these animals and set out to standardize the Southdown breed. In the 19th and first half of the 20th centuries, they were found in large numbers, especially in the South Downs near Lewes.

In 1813, Arthur Young estimated 200,000 ewes were kept on the eastern South Downs and commented, "the amazing number they keep is one of the most singular circumstances in the sheep husbandry of England".

The principal reason for the large concentrations of Southdown sheep on downland farms over these centuries was their role in the maintenance of soil fertility. The large flocks grazed the open downs by day and at dusk they came down to the lower arable land for folding. The downland soils are chalky and not naturally fertile, so the close-folding by the sheep on small areas manured and trod the soil. This meant wheat could be grown successfully the following year. With the gradual introduction of new crops such as field turnips, swedes, kohl rabi and other forage crops, the folding system took off, increasing in parallel with expanding human population. The system reached its zenith from about 1845 to 1880.

The 20th century brought the establishment of pedigree recording. By 1911, 359 registered Southdown flocks contained some 114,495 breeding ewes throughout Britain.

Much remained the same until the First World War, when the Southdown flocks declined with some rapidity, as shepherds and farm workers went off to war. By 1922, the 359 pedigree flocks had shrunk to 245. From then until 1939, the registered Southdown flocks numbered around 200. Folded flocks were no longer economical and smaller flocks averaged only 135 ewes apiece.

The use of artificial fertilizers had gained ground, and the combine-drill, which sowed grain seeds and fertilizer together, rendered close-folding by sheep unnecessary. Gradually surrendering to basic arable farming changes, the Southdown became largely a grassland breed. During the interwar years, the United Kingdom was known for farm animal breeding, and pedigreed Southdowns were still being exported to most parts of the world, especially New Zealand. In 1937, the number of exported Southdowns reached 459 head.

During the Great Depression, a severe and prolonged fall in the prices of wool and cereals due to rising volumes of imports from the British Empire was accompanied by the Wet Years - a six-year period of cold, wet weather with little sun.

In the Second World War, the South Downs were commandeered for military training, only fringe farms being left to produce milk for the towns. Sheep farming declined further after the war, although it is now being encouraged again through the designation of the downland as an environmentally sensitive area, and the restoration of arable land to sheepwalk. The Southdown has been placed on a watch list by the Rare Breeds Survival Trust.

The original Southdown breed probably reached the United States in 1803. Their popularity grew because the Southdowns were very easy to take care of and were resilient to many problems for which other sheep are known. They later declined in nearly the same pattern that had occurred in England. One other factor that affected the original bloodlines was that the Southdown could not satisfy the consumer demand for larger meat cuts. This was significant in the development and mass production of the larger, leggier Southdown of today. This divergence from the original breed standards was the beginning of what later became two distinct lines in the US.

In 1986, a breeder, Robert Mock, began a search for the sheep with bloodlines that conformed to the original Southdowns. After a four-year search, two small flocks totaling 26 sheep were located; however, this group was not able to provide a sustainable gene pool. Mock continued his extensive search, and by 1990, he was able to find a total of 350 of the Southdown sheep that had the original bloodlines, and many of them still carried their original Southdown registration papers recognized by the UK. At that time, Mock started the first and original Olde English Southdown Registry to market this once meat breed to a completely new market for people looking for pets and 4H projects, and he started the "Babydoll" used by the members of the original registry, as well as the few spin-off Babydoll registries.

When Mock and his associates were searching for the stock to start the new registry, only adult Babydoll sheep, two years and older, were accepted in the flock, so they could be judged against the original conformation standards as verified by a veterinarian. Each sheep's registration application was passed before a board of three members of the soon to be formed Olde English Southdown Registry. After this initial review and acceptance period, the "Foundation Flock" registry was closed in 1991. Subsequently, the process of registering lambs from this newly established foundation flock began.

All content from Kiddle encyclopedia articles (including the article images and facts) can be freely used under Attribution-ShareAlike license, unless stated otherwise. Cite this article:
Southdown sheep Facts for Kids. Kiddle Encyclopedia.