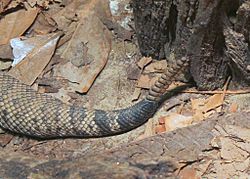 The eastern diamondback rattlesnake (Crotalus adamanteus) is a species of venomous pit vipers, found in southeastern United States of America. It is the largest rattlesnake, and the heaviest venomous snake in the Americas. There are currently no subspecies found.

The head of an eastern diamondback rattlesnake

They live in dry pine forests, salt marshes, swamp forests, and cypress swamps of United States of America. The U.S.A's states which it lives in are southeastern North Carolina, Florida, southern Alabama and Mississippi.

The eastern diamondback rattlesnake catches its prey by ambushing it. It eats small mammals like rabbits and rats, birds and sometimes lizards. Since of adults large size they can easily attack and eat adult rabbits, there have also been reports on some eating turkeys. Young eastern diamondback rattlesnake eat mainly small rodents like mice, rats and squirrels. Sometimes they also eat large insects.

The eastern diamondback rattlesnake, like all rattlesnakes, are ovoviviparous. A female is pregnant for around five to six months before giving birth to her young. The young stay with their mother for a few hours (up to a few days at most) before leaving on their own to go and hunt for food. Because of this, many of the young snakes die quickly. Females give birth to around 7 to 21 young at a time; they give birth to their young in July to early October. Young are born to be about 12 inches (30 cm) long. When they are born they look similar to adults, but have a small button on their tail, unlike adults who have rattles on their tail. 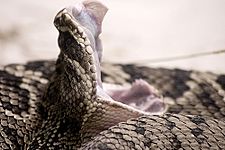 This species has the reputation of being the most dangerous venomous snake in North America. While not usually aggressive, they are large and powerful. Wright and Wright mentioned a mortality rate of 30%, but other studies show a mortality rate of 10-20%.

In proportion to its length, it has the longest fangs of any rattlesnake species. The estimated human lethal dose is 100–150 mg.

The venom contains a thrombin-like enzyme, "crotalase", capable of clotting fibrinogen, leading to the secondary activation of plasminogen from endothelial cells. Although the venom does not activate platelets, the production of fibrin strands can result in a reduced platelet count, as well as the hemolysis of red blood cells. Even with this defibrination, however, clinically significant bleeding is uncommon. Nevertheless, the venom does exhibit high hemorrhagic activity. It also contains a low-molecular-weight basic peptide that impedes neuromuscular transmission and can in theory lead to cardiac failure. This peptide is similar to crotamine from C. durrisus terrificus, and makes up 2-8% of the protein found in the venom. In general, the venom can be described as highly necrotizing, mildly proteolytic and containing a large phosphodiesterase fraction. It stimulates the release of bradykinin that can result in severe pain, as well as profound, transient hypotension.

All content from Kiddle encyclopedia articles (including the article images and facts) can be freely used under Attribution-ShareAlike license, unless stated otherwise. Cite this article:
Eastern diamondback rattlesnake Facts for Kids. Kiddle Encyclopedia.