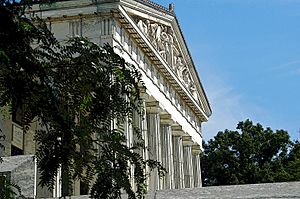 Designed by Buffalo architect George Cary (1859–1945), its south portico is meant to evoke the Parthenon in Athens. The building was designated a National Historic Landmark in 1987.

Founded in 1862, the Buffalo Historical Society's first president was Millard Fillmore. Its exhibits, programs, and events are attended by schoolchildren, families, and students. It has hosted observances of Lincoln's Birthday for over a century.

From 1879 to 1947, the Society published pioneering scholarship on the people, events, and history of the Niagara Frontier. Many of those volumes are now online in full text.

All three floors of the building offer exhibits, including the Rotary Gallery (featuring elaborate model trains), the Pioneer Gallery, the Erie County Room, the State Court, the Community Gallery, Native American Gallery, Neighbors, and ICONS. A recreation of Tim Russert's office opened in October 2014 after having been installed at the Newseum in Washington, D.C. On view by appointment in the Museum's Resource Center on Forest Avenue is the gun used by Leon F. Czolgosz to shoot President William McKinley at the Exposition's Temple of Music on September 6, 1901.

In November 2017, the Buffalo History Museum opened the Icons: The Makers and Moments of Buffalo Sports exhibit. The new exhibit explores Buffalo New York's rich sports history and investigates the unique connection between fans and the beloved teams and sports idols of the area. Highlights include Ralph Wilson's hall of fame jacket, the only helmet Scott Norwood ever wore during his career as a Buffalo Bill, and a changing exhibit currently featuring the Buffalo Beauts.

Of particular interest to historians, genealogists, researchers, and house history buffs are the collections of the Research Library. Notable collections include:

In addition there is similar ephemera that documents the people, places, architecture, organizations, businesses, and events in the Buffalo and Niagara frontier region. A number of detailed bibliographies on popular topics are online at WorldCat.

FRANK, the library's growing catalog of 25,000 books and manuscripts, is freely searchable online.

In 2011, after the passage of equal marriage in the State of New York, the Research Library became the first known library in the United States to collect wedding memorabilia from legally wed same-sex couples.

The left, center, and right sections of the pediment atop the Museum, is designed by Edmond Amateis and includes several figures.

All content from Kiddle encyclopedia articles (including the article images and facts) can be freely used under Attribution-ShareAlike license, unless stated otherwise. Cite this article:
Buffalo History Museum Facts for Kids. Kiddle Encyclopedia.