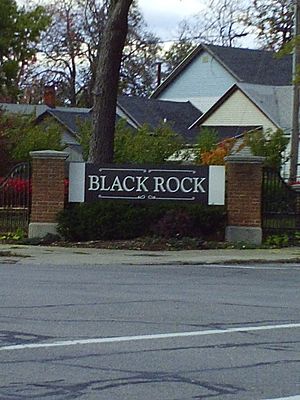 Black Rock Neighborhood Sign at the Corner of Amherst and Niagara.

Black Rock, once an independent municipality, is now a neighborhood of the northwest section of the city of Buffalo, New York. In the 1820s, Black Rock was the rival of Buffalo for the terminus of the Erie Canal, but Buffalo, with its larger harbor capacity and greater distance from the shores of Canada, a recent antagonist during the War of 1812, won the competition. Black Rock took its name from a large outcropping of black limestone along the Niagara River, which was blasted away in the early 1820s to make way for the canal.

In spite of losing the Erie Canal terminus to Buffalo and twice being burned to the ground by the British during the War of 1812, Black Rock continued to prosper and in 1839, was incorporated as a town. In 1853, the City of Buffalo annexed the town of Black Rock.

Because of its strategic position across the Niagara River from Canada, Black Rock was an important crossing place for African-Americans escaping slavery via the Underground Railroad. This heritage is celebrated with an annual Underground Railroad Re-Enactment at Broderick Park on Unity Island at Niagara and West Ferry Streets, the site of a ferry crossing prior to the construction of passenger bridges.

Black Rock's history is amply documented in the library collections of the Buffalo History Museum.

The Market Square Historic District was listed on the National Register of Historic Places in 2011.

In the 1870s, the International Railway Bridge connected the two nations at Black Rock, an engineering marvel at the time. The Black Rock Rail Yard handled both passenger service and commercial transport of goods into and out of Canada. Following the completion of the St. Lawrence Seaway, the construction of the United States's Interstate Highway system, Canada's Queen Elizabeth Highway, and the increase of commercial air travel, the Black Rock Rail Yard lost its passenger service and later most of its commercial freight service. The railroad bridge, however, remains in heavy usage and is one of the most important rail crossings between the United States and Canada.

Black Rock's best-known resident was American poet Robert Creeley, who lived with his family in a converted firehouse at the corner of Amherst and East Streets from 1990 to 2003. Another prominent resident was US Secretary of War Peter Buell Porter. Current residents include prominent Buffalo architect Max Willig who lives in the historic Amherst National Bank Building at the corner of Amherst and Germain Streets.

All content from Kiddle encyclopedia articles (including the article images and facts) can be freely used under Attribution-ShareAlike license, unless stated otherwise. Cite this article:
Black Rock, Buffalo Facts for Kids. Kiddle Encyclopedia.