Hamburg is a town in Erie County, New York, United States. As of the 2010 census, the town had a total population of 56,936. It is named after the city of Hamburg, in Germany. The town is on the western border of the county and is south of Buffalo. Hamburg is one of the Southtowns in Erie County. The villages of Hamburg and Blasdell are in the town.

Vintage image of Woodlawn Beach in 1896

Historical evidence shows that the area was settled originally by the Erie people. Around 1805 the settlement was known as "Barkerville", named after Zenas Barker, the postmaster. On the site of this building today is the Dock at the Bay. The first landowner in the area was John Cummings, who built the first grist mill in 1806.

The town of Hamburg was formed by government decree on March 20, 1812, from the (now defunct) town of Willink. The first town meeting took place on April 7, 1812, at Jacob Wright's tavern at Wright's Corners, which was renamed Abbott's Corners, and now Armor. One of the early noted activities of the town board in that same year was to place a $5 bounty on wolf hides, due to the complaints of the local settlers who were being bothered by them.

In 1815, mail routes were established. The earliest settlers in the area were from New England. Germans started arriving in the 1830s and set up many successful farms. On November 29, 1824, a meeting was held in Abbott's Corners at the home of early settler Seth Abbott. At a vote of those present, agreement was reached to form a library with the sum of $102.

By 1850, the town was reduced by the formation of the towns of Orchard Park and West Seneca. Around 1852, the Erie Railroad was built through the area. In 1868 the Erie County Fair came to the town and has been located there since then. In 1875 the weekly publication of the Erie County Independent began. This is now known as The Sun. Telephone service in the area started in 1886.

The village of Hamburg set itself off from the town in 1874 by incorporating as a village.

Starting in 1890 and to support the growing regional steel industry, Polish and Italians began to arrive in the area.

In 1897, a group of women known as the Nineteenth Century Club started a permanent free public library, known as the Hamburg Free Library. Until 1901 it was located in various rented buildings. The Hamburg Free Library was moved into a Carnegie library on Center Street on November 8, 1915, where it remained until 1966 when the current library at 102 Buffalo Street was opened.

In 1898, the community of Blasdell set itself apart from the town by incorporating as a village.

A trolley car system was established in the early 1900s.

The Kleis Site, containing the remnants of a 17th-century Iroquoian village and burial ground, was listed on the National Register of Historic Places in 1979.

In 2003, Joe Haptas, a spokesman for the animal rights group People for the Ethical Treatment of Animals (PETA), sent a letter to then-Town Supervisor Patrick Hoak and asked that the name of Hamburg be changed to "Veggieburg". PETA offered the Hamburg Central School District $15,000 worth of free veggie burgers as an incentive for the name change. Hoak declined the name change.

In July 2012, Main Street in the village of Hamburg from Lake Street to Buffalo Street was granted state approval for nomination as a national historic district. 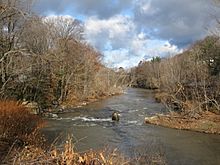 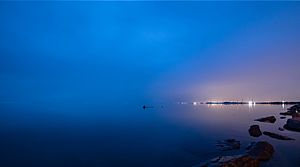 Evening view of Buffalo from Bayview Road in Hamburg. Windmills can be seen in the distance.

The Erie County Fair is situated on a 275-acre (111 ha) plot of land near the village of Hamburg. The fair, operated by Strates Shows, runs for twelve days in August and is the third-largest county fair in the United States.

The Seaway Trail, a National Scenic Byway, travels through Hamburg on New York Route 5, along the Lake Erie shoreline. The Lake Erie Seaway Trail Center, a seasonal visitors information center with exhibits and public waterfront access, is located in Hamburg.

Woodlawn Beach State Park, located on the shore of Lake Erie, was opened as a state park in 1996, and has been operated since 2011 by the town of Hamburg under a ten-year agreement with New York State.

All content from Kiddle encyclopedia articles (including the article images and facts) can be freely used under Attribution-ShareAlike license, unless stated otherwise. Cite this article:
Hamburg, New York Facts for Kids. Kiddle Encyclopedia.