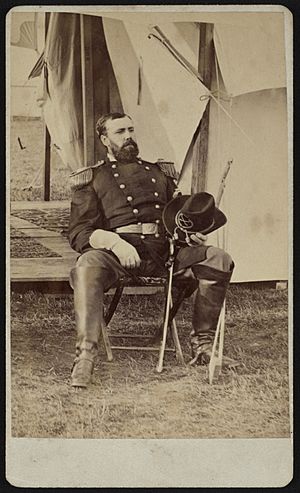 Eugene Asa Carr (March 20, 1830 – December 2, 1910) was a soldier in the United States Army and a general in the Union Army during the American Civil War. He was awarded the Medal of Honor for his actions at the Battle of Pea Ridge.

Carr was born in Hamburg, New York. He graduated from the United States Military Academy at West Point, New York, in 1850, 19th in a class of 44 cadets. He was appointed a brevet second lieutenant in the Regiment of Mounted Riflemen, and served in the Indian Wars until 1861, seeing his first bit of combat on October 3, 1854 against Apaches near the Sierra Diablo Mountains. By 1861 he had been promoted to captain (June 11, 1858) in the old 1st U.S. Cavalry (later designated the 4th U.S.) and command of Fort Washita in the Indian Territory.

During the Civil War, Carr's first combat was at the Battle of Wilson's Creek on August 10, 1861. He was appointed colonel of the 3rd Illinois Cavalry six days later and received a brevet promotion to lieutenant colonel in the regular army.

At the Battle of Pea Ridge in Arkansas, on March 7, 1862, Carr led the 4th Division of the Army of the Southwest in the fighting around Elkhorn Tavern. He was wounded in the neck, arm and ankle and was later awarded a Medal of Honor for his actions. According to the official citation, Carr had "directed the deployment of his command and held his ground, under a brisk fire of shot and shell in which he was several times wounded." On April 30, 1862, President Abraham Lincoln appointed Carr brigadier general of volunteers, to rank from March 7, 1862. The President had submitted the nomination to the U.S. Senate on April 11, 1862 and the Senate had confirmed the appointment on April 28, 1862 Carr briefly commanded the Army of the Southwest from October 7 to November 12, 1863. He commanded the 2nd Division of the Army of Southeast Missouri before he and his division were transferred to the Army of the Tennessee as the 14th Division in the XIII Corps.

During the Vicksburg Campaign Carr led the attack on Confederate forces at the Battle of Port Gibson. He fought in subsequent battles at Champion's Hill and Vicksburg. After the fall of Vicksburg, Carr was transferred back to Arkansas where he was placed in command of a division in the Army of Arkansas. Eventually Carr commanded the Cavalry Division in the VII Corps during Frederick Steele's Camden Expedition. For the rest of 1864 he commanded the District of Little Rock. His final assignment of the war was to command of the 3rd Division of the XVI Corps in preparation for the Union campaign against Mobile, Alabama, where he subsequently fought in the battle of Fort Blakely. On March 11, 1865, President Lincoln nominated and the U.S. Senate confirmed Carr for appointment to the brevet grade of major general of volunteers to rank from March 11, 1865. Carr was mustered out of the volunteers on January 15, 1866. On July 17, 1866, President Andrew Johnson nominated Carr for appointment to the brevet grade of major general, USA (regular army), to rank from March 13, 1865, and the U.S. Senate confirmed the appointment on July 23, 1866.

Subsequently, Carr stayed in the Regular Army and conducted successful operations on the frontier against the Indians, winning a significant battle at Summit Springs. He became Colonel of the 6th Cavalry Regiment in 1879; and Brigadier General in 1892. He was in command at the incident at Cibecue Creek with the Apache in 1881. He was the last commander of the District of New Mexico from November 26, 1888 to Sept. 1, 1890.

Carr finally retired in 1893. His military nickname was "The Black-Bearded Cossack". Carr died in Washington, D.C. in 1910 and is buried in the West Point Cemetery, New York.

All content from Kiddle encyclopedia articles (including the article images and facts) can be freely used under Attribution-ShareAlike license, unless stated otherwise. Cite this article:
Eugene Asa Carr Facts for Kids. Kiddle Encyclopedia.