Blasdell is a village in Erie County, New York, United States. The population was 2,553 according to the 2010 Census. The name is derived from Herman Blasdell, the first station master of the Erie and Pennsylvania railroad depot. It is part of the Buffalo–Niagara Falls Metropolitan Statistical Area.

Blasdell is in the northern part of the town of Hamburg and is bordered to the north by the city of Lackawanna, directly south of Buffalo. The village calls itself the "Gateway to the Southtowns" of Erie County.

The community grew as a railroad town around the Erie Railroad. Blasdell was incorporated in 1898 as a village.

Wrestler Ilio DiPaolo was a longtime resident, before his death in 1995. In 1965 he opened an Italian restaurant on South Park Avenue. It is now run by his family.

Blasdell is one of two municipalities in Erie County to have a registered Conservative as its executive, the other being Newstead.

According to the United States Census Bureau, the village has a total area of 1.1 square miles (2.8 km2), all land.

It is named after Heman Blasdell, its founder.

Major highways in the Village of Blasdell 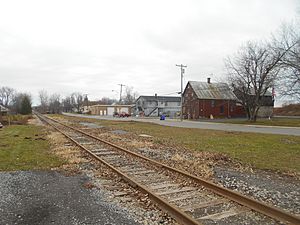 There were 1,201 households out of which 26.3% had children under the age of 18 living with them, 39.6% were married couples living together, 12.5% had a female householder with no husband present, and 43.0% were non-families. 37.6% of all households were made up of individuals and 15.6% had someone living alone who was 65 years of age or older. The average household size was 2.26 and the average family size was 3.04.

All content from Kiddle encyclopedia articles (including the article images and facts) can be freely used under Attribution-ShareAlike license, unless stated otherwise. Cite this article:
Blasdell, New York Facts for Kids. Kiddle Encyclopedia.