Lake View is a hamlet in Erie County, New York, United States. Lake View is in the town of Hamburg. 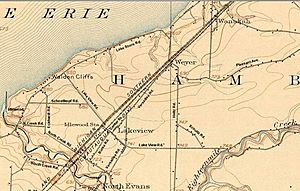 It is 15 miles (24 km) south of Buffalo along Lake Erie. It is bounded by Eighteen Mile Creek on the south, Pleasant Avenue on the north, Lake Erie on the west and the village of Hamburg on the east.

Early settlers were Ebenezer Ames, Jacob F. Schoellkopf, a successful entrepreneur in western New York, and Ebenezer Walden, a prominent Buffalo attorney and mayor whose family built the Lake View Hotel in 1880 to serve the many traveling salesmen who arrived on the seven daily trains on the Lake Shore and Michigan Southern Railway (later part of New York Central Railroad) to sell their wares in the surrounding countryside. The salesmen (called "drummers") would rent a horse and buggy from the livery stable behind the six-room hotel to make their rounds. 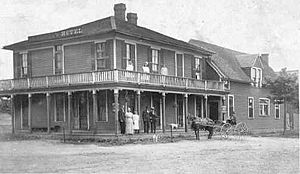 By 1890, two more railroads ran through Lake View - the New York, Chicago and St. Louis Railroad (the Nickel Plate Road) and the Pennsylvania Railroad which brought economic prosperity to the small community. An electric trolley called the Buffalo & Erie was built to facilitate travel to and from Buffalo and operated until the mid-1930s.

Lake View was the site of the creation by several attorneys from Buffalo of a summer resort colony called Idlewood in 1886, the Lake View Community Church in 1889, Lake View School in 1890, the Gatling Land Boom in 1893, the Day Bicycle Factory in 1895, Our Lady of Perpetual Help Catholic Church in 1921, and the Lake View Fire Association in 1923.

In the late 1950s, the Lake View Community Association produced a cookbook called "The ABC's of Cooking" which contained many favorite recipes from the town's residents.

All content from Kiddle encyclopedia articles (including the article images and facts) can be freely used under Attribution-ShareAlike license, unless stated otherwise. Cite this article:
Lake View, New York Facts for Kids. Kiddle Encyclopedia.