Collins is a town in Erie County, New York, United States. The town is on the south border of the county and is considered to be one of the "Southtowns" of Erie County. The population at the 2010 census was 6,601. 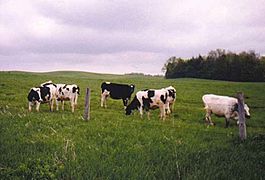 The area was first settled in 1811. Many of the first settlers were Quakers, who intended to assist the local Native Americans. The town of Collins was formed March 6, 1821, from the town of Concord, and was named after the Collins family, a dairy farming family who lived in and were publicly active in the area. The town lost land to create the new towns of Brant in 1839 and North Collins in 1852. Because of the concentration of dairy farms, there were once ten cheese and milk factories in the town.

Communities and locations in Collins

All content from Kiddle encyclopedia articles (including the article images and facts) can be freely used under Attribution-ShareAlike license, unless stated otherwise. Cite this article:
Collins, New York Facts for Kids. Kiddle Encyclopedia.