Greece is a town in Monroe County, New York, United States. As of the 2010 United States census, the town had a total population of 96,095. The town motto is "Discover the Promise."

The Town of Greece was established in 1822 from part of the Town of Gates and was previously called Northampton. The name "Greece" was selected because of the contemporary struggle of Greece for independence from the Ottoman Empire.

The region that the town now occupies was originally settled by the Algonquian and Iroquois Native Americans in the 14th century. The first European to visit the area was the French explorer Rene-Robert Cavelier, who visited in 1669. European settlers began to arrive in the area in the 1790s, and French and British soldiers passed through on multiple occasions during this time period as the two colonial powers struggled to control the region.

According to the Morgan Quitno Awards, Greece was rated the ninth-overall-safest city in America and the sixth-safest city with a population of 75,000 to 99,999.

Major highways in the town include NY 390 and the Lake Ontario State Parkway. As that suggests, the town borders Lake Ontario. 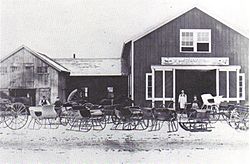 Communities and locations in Greece

All content from Kiddle encyclopedia articles (including the article images and facts) can be freely used under Attribution-ShareAlike license, unless stated otherwise. Cite this article:
Greece (town), New York Facts for Kids. Kiddle Encyclopedia.