Brighton is a town in Monroe County, New York, United States. The population was 37,137 at the 2020 census. 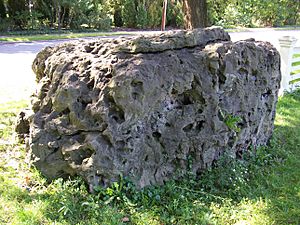 Council Rock, on East Avenue in Brighton, formerly used by the Seneca

The Town of Brighton, located on the southeast border of the city of Rochester, was originally settled approximately 1790, and formally established in 1814—earning it recognition as one of the oldest towns in Monroe County. Named for Brighton, England, it remained a farming and brick-making community until the 20th century, when the town began its evolution into an upscale suburban residential area, occupying some 15 square miles (39 km2). In 1999, the town purchased 64 acres (259,000 m²) with the intention of developing a central park.

The Alcoa Care-free Home and Stone-Tolan House are listed on the National Register of Historic Places.

Brighton has lacked a central village since the city of Rochester annexed the area around East Avenue and Winton Road, formerly the village of Brighton, in 1905. The central entertainment and commercial hub is the Twelve Corners, so named because three intersecting roads, Winton Road, Monroe Avenue and Elmwood Avenue, define 12 distinct corners. Also, both the High School (Brighton High School) and the Middle School (Twelve Corners Middle School) are located at Twelve Corners. Brighton is bordered by the city of Rochester and the town of Irondequoit northwest, the town of Henrietta to the south, the Genesee River and Chili the west, and the towns of Pittsford and Penfield to the east. Brighton is located some 60 miles (97 km) from Buffalo, and 90 miles (140 km) from Syracuse. The Erie Canal courses through Brighton, accompanied by the acclaimed Erie Canal Heritage Trail, one of the longest continuous stretches of maintained off-road trail in the United States. 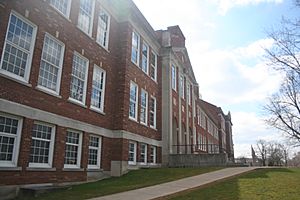 Brighton High School, the only public high school in Brighton

Much of the Town of Brighton is served by the Brighton Central School District, which frequently earns high positions in Newsweek national rankings (5th in 1998). Very recently, the ratings have gone down, possibly because some of the school teachers in Brighton have retired or because of increased emphasis on APs in other schools. In 2007, Brighton placed higher (87th) than its cross-town rival, Pittsford Mendon High School (94th) for the first time in several years.

Brighton was recently ranked #56 out of over 18,000 in the inaugural U.S. News & World Report ranking of U.S. high schools (2007), which is generally regarded as having more breadth of analysis than the Newsweek rankings. (The former rankings are formed based upon numerous quantifiable factors, whereas the Newsweek rankings solely examine the raw number of students enrolled in AP classes per capita.) No other school in Monroe County placed in the top 1,000, including, most notably, cross-town rival Pittsford Mendon High School. In 2019, Brighton High School was ranked #786 nationally by U.S. News & World Report.

Other portions of the Town of Brighton are served by other school districts:

Brighton is also home to the main campus of Monroe Community College and auxiliary campuses of Empire State College, Medaille College, and the University of Rochester.

All content from Kiddle encyclopedia articles (including the article images and facts) can be freely used under Attribution-ShareAlike license, unless stated otherwise. Cite this article:
Brighton, Monroe County, New York Facts for Kids. Kiddle Encyclopedia.