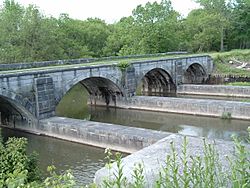 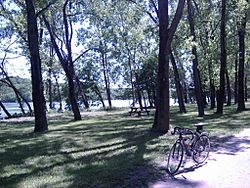 A picnic area on the Mohawk Hudson Bike/Hike Trail, along the Hudson River

A partnership of national, state, local and non-profit organizations is working to complete a continuous system of trails along these canals. Among the organizations involved are Parks & Trails New York, the New York State Canal Corporation and the Erie Canalway National Heritage Corridor.

Before the railroad era, New York had an extensive network of canals. As commercial freight shifted away from canals and towards rail and highways, communities along the canals needed new ways to generate commerce. In 1995, the Canal Corporation issued a recreation plan, which offered a view of the Canal as a linear park, including trails linking communities along the trail. Biking, hiking, snowmobiling, cross-country skiing, horseback riding, canoeing, and fishing are among activities promoted.

The original canals were flanked by towpaths, where mules walked while pulling barges through the canals. Many of the canalway trails follow former towpaths. Some trails follow canals that are still in use, serving mostly recreational boating. Other towpath trails pass by the ruins of abandoned locks and other structures. Many communities along the canal have made progress in establishing parks, improving towpaths and raising funds for restoration of old canal structures such as locks and aqueducts.

As of 2021, the Erie Canalway Trail is 100% complete. As part of the Empire State Trail project, the remaining gaps in the trail were filled and completed, both on-road and off-road, by the end of 2020.

Some of the individual sections are included below:

Segments are listed from west to east.

All content from Kiddle encyclopedia articles (including the article images and facts) can be freely used under Attribution-ShareAlike license, unless stated otherwise. Cite this article:
New York State Canalway Trail Facts for Kids. Kiddle Encyclopedia.