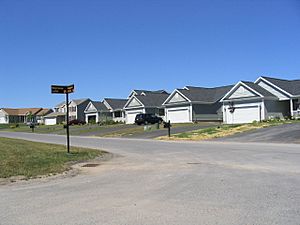 Camillus is a town in Onondaga County, New York, United States. The population was 24,167 at the 2010 census.

The Town of Camillus is west of Syracuse. There is also a village named Camillus in the town. Much of the town is a western suburb of Syracuse.

According to the United States Census Bureau, the town has a total area of 34.5 square miles (89.3 km²), all of it land. 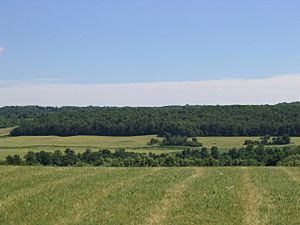 The rolling hills of Camillus are located just west of Syracuse, NY.

Camillus was part of the former Central New York Military Tract. Joseph Sherwood, the first pioneer arrived around 1795 at the site of the village of Camillus. The Town of Camillus was formed in 1799 with land from the Town of Marcellus. Industrial development was promoted by the Erie Canal in 1825. Camillus was also on the railroad line linking Syracuse to Auburn in 1838. The Nine Mile Creek Aqueduct and Wilcox Octagon House are listed on the National Register of Historic Places.

Communities and locations in the Town of Camillus

All content from Kiddle encyclopedia articles (including the article images and facts) can be freely used under Attribution-ShareAlike license, unless stated otherwise. Cite this article:
Camillus, New York Facts for Kids. Kiddle Encyclopedia.