Marcellus is a town in Onondaga County, New York, United States. The population was 6,210 at the 2010 census. The town was probably named after Marcus Claudius Marcellus, a Roman general, by a clerk interested in the Classics.

The Marcellus Formation is a vast geological layer of shale spanning Pennsylvania, West Virginia and parts of other states and Ontario, which is named for an outcropping in or near Marcellus.

The Town of Marcellus contains a village also named Marcellus. The town and village are southwest of Syracuse. 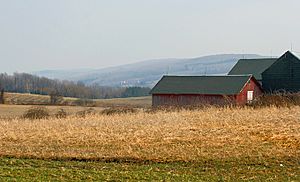 Marcellus is at the east end of the Finger Lakes District and is at the north end of Otisco Lake. High hills, deep valleys, lake and streams, make the town remarkably scenic. Nine Mile Creek is a noted trout stream where New York State provides several access areas. Marcellus Park, which was once an Onondaga County Park, was taken over by the Town of Marcellus in 1993. The village of Marcellus is one of 15 villages in Onondaga County. Baltimore Woods Nature Center [1] is nearby.

The territory was part of the lands of the Onondaga tribe. Marcellus was a named township in the former Central New York Military Tract. It was first settled by outsiders around 1794.

The town was formed in 1794, The Town of Geddes was removed in 1798. The township of Camillus was taken off in 1799. Otisco was removed in 1806. In 1830, the west part of the town was used for the new Town of Skaneateles. Marcellus regained territory in 1840 from Spafford and Otisco.

The Tefft-Steadman House was listed on the National Register of Historic Places in 2007. 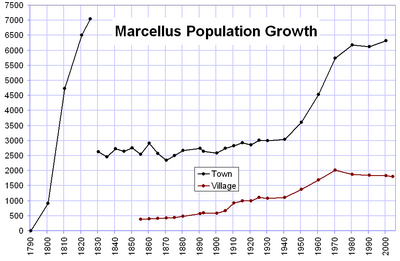 Population of the Town and Village of Marcellus from 1790 to 2004. The rapid decline between 1825 and 1830 was due to both a decrease in the area of the town and the general population shift westward.

There were 2,378 households, out of which 37.1% had children under the age of 18 living with them, 63.3% were married couples living together, 8.0% had a female householder with no husband present, and 25.4% were non-families. 22.3% of all households were made up of individuals, and 9.5% had someone living alone who was 65 years of age or older. The average household size was 2.66 and the average family size was 3.14.

Communities in the Town of Marcellus

All content from Kiddle encyclopedia articles (including the article images and facts) can be freely used under Attribution-ShareAlike license, unless stated otherwise. Cite this article:
Marcellus, New York Facts for Kids. Kiddle Encyclopedia.