Geddes is a town in Onondaga County, New York, United States. The population was 17,118 at the 2010 census.

The Town of Geddes is west of the neighborhood of Far Westside of Syracuse. The town is a western suburb of Syracuse. 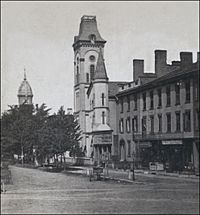 The town was formed from the Town of Salina in 1848. It is named after James Geddes, a prominent early settler who settled at the head of Onondaga Lake in 1794 and developed the salt industry.

There also was an Old Geddes Village which included part of the west side of Syracuse and Tipperary Hill, the village square being located near St. Mark's Circle. The village of Geddes (incorporated in 1832 and 1837) was annexed to the City of Syracuse on May 20, 1886 with a population of nearly 7,000. Today the town of Geddes still includes the Village of Solvay, which operates independently, and the hamlets of Westvale and Lakeland

Geddes is the youngest town in Onondaga County.

Geddes was formed from Salina on March 18, 1848. It lies upon the west bank of Onondaga Lake with level surface in the north and rolling hills in the south. In the southwest of the town, are several isolated, rounded drift hills (or knolls).

The Seneca River forms the north border and Onondaga Creek formed part of the eastern boundary. Nine Mile Creek flows east through the center of town.

The soil is clay and sandy loam. In 1859, the town contained two churches, both Protestant, an Episcopalian and Methodist Episcopalian.

By 1859, several salt wells were located near the southwest extremity of the lake. The S.B.& N.Y.R.R. coal depot was situated on the Erie Canal. In the southeast section of town, there were extensive stone quarries.

There was also a brewery and distillery, and a large number of salt works within the town limits. The population was 950.

In 1841, W. H. Farrar, who had recently arrived from Vermont, started a small pottery business in the town of Geddes, New York called Farrar Pottery for making salt-glazed stoneware, an American ceramic product around since colonial times. During 1868, Farrer sold the business to a group who formed the Empire Crockery Manufacturing Company.

On July 20, 1871, several local businessmen purchased the struggling local pottery, incorporated, capitalized the company for $50,000, and began to expand its lines to produce white earthenware for table and toilet use. At that time, the name changed to Onondaga Pottery Company (O.P.Co.). The company name was officially changed to Syracuse China in 1966. They specialized in the manufacture of fine china and commercial ware.

By 1879, there were several manufacturers in the town including Onondaga Iron Works and Sterling Iron Ore Company both operated by J. J. Belden, president. W. H. H. Gere and A. J. Belden were secretary and treasurer of the companies. 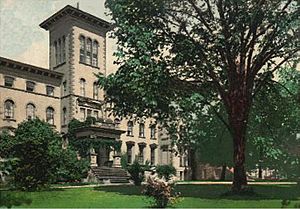 The New York State Asylum for Idiots was located in the eastern section of town, near the original border with Syracuse on Geddes Street. The facility was located on Wilbur Avenue on the southeast border of Tipperary Hill. The site selected was about a mile southwest of Syracuse, in the town of Geddes, and was "one of the finest that could have been found in the State of New York." The building was constructed of brick, "plain but substantial, and admirably fitted for the purpose for which it is designed."

The institution was located upon the eastern slope of the range of hills in the western part of the city and about 1-1/2 miles south of the head of Onondaga Lake. The asylum grounds covered an area of about sixty-five acres, immediately adjacent to Burnet Park, the most of which was high land, overlooking the city and lake. The principal group of buildings, which were clustered around the original structure, facing the western extremity of Seymour Street, accommodated about 450 individuals.

Geddes is on the west shore of Onondaga Lake.

Communities and locations in Geddes

All content from Kiddle encyclopedia articles (including the article images and facts) can be freely used under Attribution-ShareAlike license, unless stated otherwise. Cite this article:
Geddes, New York Facts for Kids. Kiddle Encyclopedia.