Solvay is a village located in the town of Geddes, Onondaga County, New York, United States, and a suburb of the city of Syracuse. According to the 2010 census, the village had a total population of 6,584. The village is named after the Solvay brothers, Belgian inventors of the chemical process employed by the Solvay Process Company, formerly the major industry of the village.

The area was within the former Central New York Military Tract, but Solvay was in a location reserved for members of the Onondaga tribe.

The village was initially founded in 1794 by James Geddes and was initially called "Geddesburgh." The first residents were mostly Irish, subsequently joined by Tyroleans and Poles. Eventually the community became known for its population largely Italian in extraction. It still retains a large segment (about 35% in 2005) of population of Italian descent. More recently many families of Ukrainian descent have settled in the village.

The village was renamed "Solvay" after 1884, when the Solvay Process Company built a Solvay process plant to produce soda ash. The Village of Solvay was incorporated in 1895. Other major businesses of Solvay include the Frazer & Jones Company (Division of the Eastern Company), a foundry; Crucible Steel, producer of specialty steels; Iroquois China Company (Solvay China); Pass & Seymour, producing electrical wiring devices, and Ben Weitsman & Son of Syracuse, LLC., a metal recycling center.

The Solvay Process plant, by then owned by Allied Chemical and Dye Corporation, closed in 1985. The community has remained stable despite this loss. 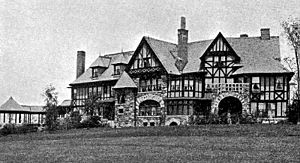 Reflecting paternalistic programs of the Solvay Process Company and the Hazard family, the first village and school library was in Guild Hall. Then Solvay received a Carnegie library in 1902. James A. Randall of Syracuse was the architect (1902-5). The building was constructed with Hazard support.

Since the Hazards' time, the village has provided superior services, as envisioned by the family. Solvay has its own municipal electric company which provides service to the village at one of the least expensive rates in the nation. A typical three bedroom home in the village which is completely electric (meaning no natural gas service) sees an average bill of around $225 per month in the winter and $160 in the summer (2009).

The Solvay Public Library was listed on the National Register of Historic Places in 2007.

According to the United States Census Bureau, the village has a total area of 1.6 square miles (4.1 km2), all of it land.

All content from Kiddle encyclopedia articles (including the article images and facts) can be freely used under Attribution-ShareAlike license, unless stated otherwise. Cite this article:
Solvay, New York Facts for Kids. Kiddle Encyclopedia.