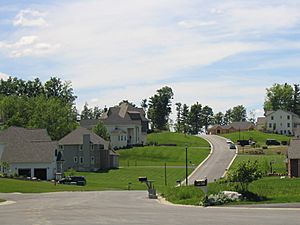 An upscale neighborhood in the hills of Onondaga just outside Syracuse

Onondaga is a town located in Onondaga County, New York, United States. As of the 2010 U.S. Census, the town had a population of 23,103. The town is named after the native Onondaga tribe, part of the Iroquois Confederacy. Onondaga is located southwest of the city of Syracuse, which it borders.

The Onondaga region was within what was designated the Central New York Military Tract, in which the new government allotted land grants to veterans as payment for their war service. In the postwar years, the area was flooded with migrants from New England and eastern New York. The Town of Onondaga was incorporated on April 2, 1798 from parts of other towns, with several subsequent boundary changes. When Onondaga County was formed in 1794, the town was established originally from parts of the Towns of Marcellus, Pompey, and Manlius.

The Gen. Orrin Hutchinson House on Seneca Turnpike is the only Town of Onondaga site listed in the National Register of Historic Places. 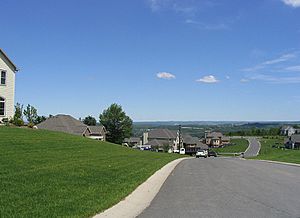 A neighborhood in Onondaga overlooking the city of Syracuse

There were 7,679 households out of which 35.1% had children under the age of 18 living with them, 60.4% were married couples living together, 8.1% had a female householder with no husband present, and 28.2% were non-families. 23.5% of all households were made up of individuals and 11.2% had someone living alone who was 65 years of age or older. The average household size was 2.64 and the average family size was 3.15.

Communities and locations in Onondaga

There are no villages in the Town of Onondaga. The following is a complete list of the town's hamlets as listed in the New York Gazetteer, as well as other localities of interest:

All content from Kiddle encyclopedia articles (including the article images and facts) can be freely used under Attribution-ShareAlike license, unless stated otherwise. Cite this article:
Onondaga, New York Facts for Kids. Kiddle Encyclopedia.