Pompey is a town in the southeast part of Onondaga County, New York. The population was 7,080 at the time of the 2010 census. The town was named after the Roman general and political leader Pompey by a late 18th-century clerk interested in the Classics in the new federal republic.

The area of Pompey was originally part of the territory traditionally occupied by the historic Onondaga, one of the Five Nations of the Iroquois tribes of the powerful Haudenosaunee, or Iroquois Confederacy. After the American Revolutionary War, when most of the Iroquois were forced to cede their land to the victorious United States, many of the Onondaga migrated to Canada. The British Crown awarded them land there for resettlement for their support during the war. New York State took over the former Iroquois lands and sold much of the public land for development (and speculation). It reserved part as the Central New York Military Tract. Veterans of the Revolution were awarded land grants in this tract as payments for service. The town was first settled by outsiders around 1789, as Yankees from New England and other migrants moved into western New York.

The town of Pompey was formed in 1789, but not completely organized until 1794, when Onondaga County was established. The original town was divided and sub-divided into many other towns in the region, including all of the towns of Fabius (1798), Tully, Preble, and Scott (the latter two now in Cortland County), along with parts of the towns of Spafford, Otisco (1806), LaFayette (1825), Onondaga (1794), Truxton and Cuyler (the latter two now in Cortland County).

The hamlet of Pompey developed about 10.5 miles (17 km) south of the main east-west Native American trail across the state, used for generations. European-American settlers improved the trail and developed it as the Genesee Road (1794) and then the Seneca Turnpike (1800), running through the villages of Cazenovia, Manlius and Onondaga Hollow (south of Syracuse). The segment of modern U.S. Route 20 (US 20), which connects Cazenovia and Skaneateles by way of Pompey and LaFayette, was not built until 1934.

The Oran District No. 22 Schoolhouse and Drover's Tavern at Oran are listed on the National Register of Historic Places.

The town is south of Syracuse. The east town line is the county line of Madison County.

US 20 is an east-west highway through the town. New York State Route 91 (NY 91), a north-south highway, intersects US 20 in Pompey hamlet. NY 92 cuts across the northwest corner of Pompey. 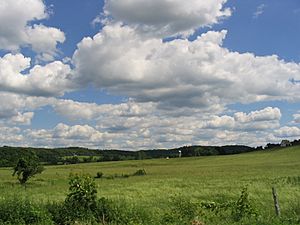 The rolling hills of Pompey are located just southeast of Syracuse.

There were 2,154 households, out of which 41.4% had children under the age of 18 living with them, 72.4% were married couples living together, 5.5% had a female householder with no husband present, and 18.2% were non-families. 14.7% of all households were made up of individuals, and 5.6% had someone living alone who was 65 years of age or older. The average household size was 2.86 and the average family size was 3.17.

Communities and locations in Pompey

All content from Kiddle encyclopedia articles (including the article images and facts) can be freely used under Attribution-ShareAlike license, unless stated otherwise. Cite this article:
Pompey, New York Facts for Kids. Kiddle Encyclopedia.