Skaneateles ( SKAN-ee-AT-ləs SKIN--) is an affluent village in the town of Skaneateles, in Onondaga County, New York, United States. The village is named after, and located on the shores of, Skaneateles Lake, one of the Finger Lakes. As of the 2010 census, the village had a population of 2,450 residents.

Settlers populated the eastern Finger Lakes region rapidly in the 1790s. Water power from the outlet from Skaneateles Lake made the site of the present village attractive. Although it had been thought that the first permanent Caucasian settler in the area was John Thompson, further research has shown that Abraham A. Cuddeback was first, arriving in 1794 from Minisink, New York; Cuddeback died in 1831. Originally part of the town of Marcellus, the town and village of Skaneateles were annexed from Marcellus and Spafford on February 26, 1830 and March 18, 1840 respectively. 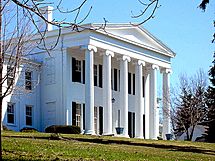 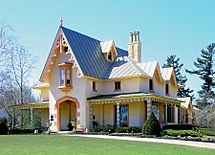 The old Genesee Road, which connected Utica, Marcellus, Auburn, Geneva and Avon became the Seneca Turnpike in 1800; the first bridge across Skaneateles Creek was built that year. The Seneca Turnpike, together with the Hamilton and Skaneateles Turnpike, opened in 1826, made the new community more accessible. Isaac Sherwood, founder of the Sherwood Inn, developed a stage coach line through Skaneateles.

The village, which incorporated in 1833 and 1855, attracted prominent residents from an early date. In 1803 a major New York State landowner from New York City, William J. Vredenburgh, erected an ambitious mansion. In 1839 Nicholas Roosevelt, "one of the leading industrial entrepreneurs of the period [who] had built the big steam engines for the Philadelphia waterwork", also from New York City, retired to Skaneateles with his wife, Lydia Latrobe – daughter of the noted architect, Benjamin Henry Latrobe.

In the same year, Richard DeZeng, an engineer and canal builder, retired from Oswego, New York to a mansion on the lake. Acquired forty years later by another member of the Roosevelt family, Samuel Montgomery Roosevelt, the Greek Revival house became known as "Roosevelt Hall." It may be the work of Ithiel Town, the partner of Alexander Jackson Davis, who designed the house of Reuel Smith, a wealthy Massachusetts importer who retired to Skaneateles. Built in 1852, the architecturally distinguished house, designed in the Gothic Revival style, has been designated to the National Registry; its plans are in the Library of Congress.

Many early residents such as James Canning Fuller came from Great Britain, largely because of the Quaker community here, giving the early village a cosmopolitan tone. Fuller and his wife, Lydia, maintained an active Underground Railroad station at their village home (built 1815, extant at 98 Genesee Street). Fuller was co-founder of the British-American Institute, a Canadian school for fugitive slaves, together with the adjoining settlement of Dawn, near Dresden, Ontario.

For more than two centuries Skaneateles has also attracted visitors and tourists. An excursion boat, launched in 1816, probably was the first instance of commercial tourist recreation in the Finger Lakes region. 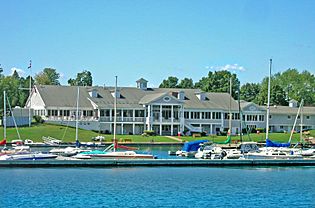 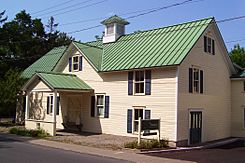 The Creamery, the headquarters and museum of the Skaneateles Historical Society 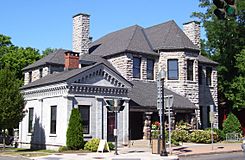 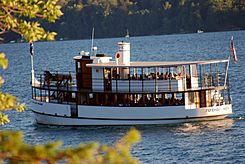 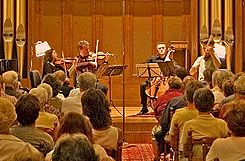 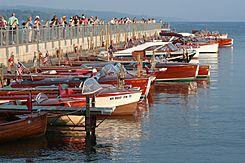 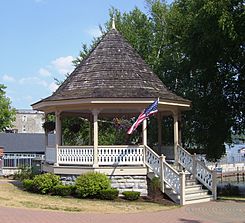 A gazebo in Clift Park

The village consists of a small commercial core with surrounding residential streets; the downtown area sits immediately on the lake. There are three publicly accessible parks on the lake within the downtown area. The main commercial streets in the village are Genesee Street (U.S. Route 20), Jordan Road, and Fennell Street. Genesee and Jordan streets, the core of the Skaneateles Historic District, are noted for their mix of mid-19th and early 20th century retail buildings which today contain a mix of retailers, including restaurants, boutiques, real estate offices, and banks. Fennell Street, which has a more industrial history and was the alignment for the railroad spur that served the village until the mid-20th century, contains more of the village's car-oriented retail stores, including a supermarket, pharmacies, and post office.

Village attractions include boat excursions, inns, restaurants and a spa, as well as boutique shopping and art galleries. The summer Skaneateles Festival of music is a seasonal event, as is the annual Skaneateles Antique and Classic Boat Show and the Dickens Christmas in Skaneateles with actors in period costume performing on the streets.

Properties in Skaneateles which are listed in the National Register of Historic Places are:

All content from Kiddle encyclopedia articles (including the article images and facts) can be freely used under Attribution-ShareAlike license, unless stated otherwise. Cite this article:
Skaneateles (village), New York Facts for Kids. Kiddle Encyclopedia.