Scott is within the former Central New York Military Tract. The first settler arrived around 1799. 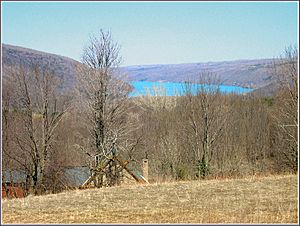 Skaneateles Lake from above Glen Haven

The south end of Skaneateles Lake, one of the Finger Lakes, is in the northwest part of the town. Grout Brook, a noted trout-fishing stream, flows into the lake from the town. The hamlet of Fair Haven in the town of Scott, together with adjoining Glen Haven in the town of Niles and Spafford Landing in the town of Spafford, comprise a scenic destination for visitors as well as an attractive community for residents. Lodging and dining facilities are available, together with docking and a marina (below).

The eastern two-thirds of town drains southward via Cold Brook and Factory Brook to the West Branch of the Tioughnioga River, part of the Susquehanna River watershed.

There were 417 households out of which 41.7% had children under the age of 18 living with them, 64.7% were married couples living together, 7.4% had a female householder with no husband present, and 22.8% were non-families. 15.6% of all households were made up of individuals and 7.0% had someone living alone who was 65 years of age or older. The average household size was 2.86 and the average family size was 3.18.

Communities and locations in Scott

All content from Kiddle encyclopedia articles (including the article images and facts) can be freely used under Attribution-ShareAlike license, unless stated otherwise. Cite this article:
Scott, New York Facts for Kids. Kiddle Encyclopedia.