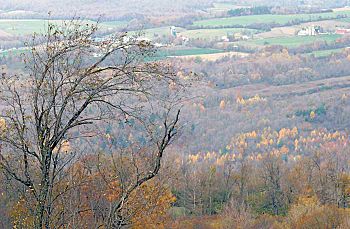 Some of the highest points in Onondaga County afford fine views.

Spafford is a town in Onondaga County, New York, United States. The population was 1,686 at the 2010 census. The town was named after Horatio Gates Spafford, a writer and founder of the local library. Spafford is in the southwestern corner of Onondaga County and is southwest of Syracuse.

Spafford was within the former Central New York Military Tract.

The first European settler arrived in 1794, the same year Onondaga County was established.

The Town of Spafford was formed in 1811 from parts of the Towns of Marcellus, Sempronius, and Tully.

Spafford's high terrain, between two of the Finger Lakes, provides spectacular scenery, as suggested by photographs linked below. Spafford is largely rural, with only small hamlets, and retains many forested areas, some protected as public preserves.

There were 631 households, out of which 35.0% had children under the age of 18 living with them, 65.0% were married couples living together, 7.1% had a female householder with no husband present, and 23.1% were non-families. 17.3% of all households were made up of individuals, and 5.2% had someone living alone who was 65 years of age or older. The average household size was 2.63 and the average family size was 2.97.

Communities and locations in Spafford

All content from Kiddle encyclopedia articles (including the article images and facts) can be freely used under Attribution-ShareAlike license, unless stated otherwise. Cite this article:
Spafford, New York Facts for Kids. Kiddle Encyclopedia.