Manlius is a town in Onondaga County, east of the city of Syracuse, New York, United States. The population was 32,370 at the 2010 census, making it the third largest suburb in metropolitan Syracuse. In 2005, the town was ranked 98th on CNN's list of Best Places to Live.

The town of Manlius includes a village also named Manlius, along with the villages of Fayetteville and Minoa. It is located on the eastern border of Onondaga County.

The town was a township of the former Central New York Military Tract. Manlius is the name of several important Romans, but exactly which one was being honored is no longer known. The current town was first settled around 1790. 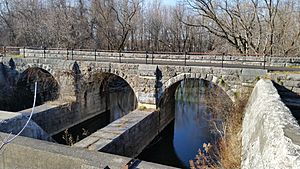 The Town of Manlius was created in 1813, along with Onondaga County, as a much larger entity, which was decreased by the formation, in part or in whole, of new towns (DeWitt, Onondaga, Salina) and part of Syracuse.

The economy related to trade generated by the Erie Canal contributed to the early development of the town.

The Christ Church and Manlius Village Cemeteries and Mycenae Schoolhouse are listed on the National Register of Historic Places.

The east town line is the border of Madison County, New York, marked in part, by the Chittenango Creek. The town of DeWitt is to the west, the town of Pompey is to the south, and the town of Cicero is to the north.

Communities and locations in the Town of Manlius 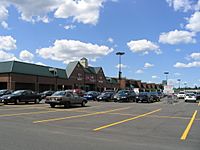 Fayetteville Towne Center Shopping Plaza has the greatest number of stores and restaurants in the Town of Manlius.

The three libraries located in the Town of Manlius -- Village of Manlius Library, Fayetteville Free Library, and Village of Minoa Library -- are branches of the Onondaga County Public Library.

Before the school districts were formed, the historic Mycenae Schoolhouse was used.

The Fayetteville-Manlius Central School District has also been recognized by New York for having a great education system, and has won many awards.

The people below were born in or were residents of Manlius, New York

All content from Kiddle encyclopedia articles (including the article images and facts) can be freely used under Attribution-ShareAlike license, unless stated otherwise. Cite this article:
Manlius, New York Facts for Kids. Kiddle Encyclopedia.