Cicero is a town in Onondaga County, New York, USA. The population was 31,632 at the 2010 census. The name of the town was assigned by a clerk interested in the classics, honoring Cicero, a Roman statesman.

The Town of Cicero is in the central part of New York, north of Syracuse. It is a northern suburb of Syracuse and is located in the northeast part of Onondaga County.

Cicero was one of the townships of the former Central New York Military Tract, land reserved for soldiers of the American Revolution.

The Town of Cicero was formed in 1790 as a Township in the Military Tract, but was part of the Town of Lysander when Onondaga County was formed in 1794 and was separated from Lysander in 1807. The first settler to arrive was John Leach, who established a tavern at Cody's Corners.

In 1827 the town was split approximately in half, with the western portion of Cicero becoming the Town of Clay.

The Stone Arabia School was listed on the National Register of Historic Places in 2007.

Oneida Lake taken from the Yacht Club in Cicero. Two small islands in the lake can be seen from this shoreline.

At the Northern border of Cicero is Oneida Lake, one of the largest bodies of water located within New York State. Also within Cicero is a fairly large swamp named Cicero Swamp. Cicero consists of mainly wetland, forests, farms and a large and growing number of housing developments encroaching on farmland. The soils are mostly brown silt loams and loams with slight to moderate acidity in surface layers (subsoils may be somewhat alkaline); their drainage varies.

The reconstructed Erie Canal follows the Oneida River along the north town line. 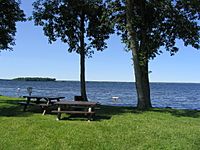 Cicero is currently undergoing a retail renaissance. Old run-down properties are redeveloped into new retail plazas like this one called The Marketplace.

There were 10,538 households out of which 38.7% had children under the age of 18 living with them, 58.9% were married couples living together, 10.1% had a female householder with no husband present, and 27.0% were non-families. 21.3% of all households were made up of individuals and 8.3% had someone living alone who was 65 years of age or older. The average household size was 2.65 and the average family size was 3.10.

Communities and locations within Cicero 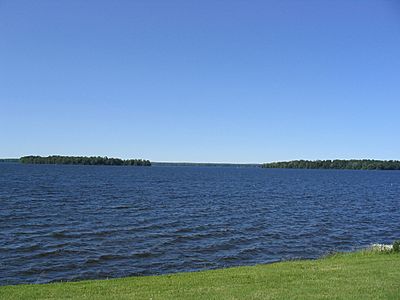 This picture was taken from the Cicero Yacht Club parking lot. Two islands can be seen. Frenchman Island on the left and Dunham Island on the right.

All content from Kiddle encyclopedia articles (including the article images and facts) can be freely used under Attribution-ShareAlike license, unless stated otherwise. Cite this article:
Cicero, New York Facts for Kids. Kiddle Encyclopedia.