Clay is a town in Onondaga County, New York, United States. As of the 2010 census, the town had a total population of 58,206, making it Syracuse's largest suburb. The town was named after Henry Clay, statesman.

Clay is northwest of Syracuse, New York. It is the largest town in the county, contains part of the village of North Syracuse, and is an affluent suburb of Syracuse. It contains the major retail strip of Syracuse's northwesterly suburbs, along New York State Route 31 (NY-31), including the Great Northern Mall.

Prior to European settlement in the area, Clay was inhabited by the Onondaga Nation, part of the Iroquois Confederacy, some of whose descendants still live in the area today.

Clay was within the Central New York Military Tract. The town was first settled by outsiders around 1791 and was previously known as West Cicero.

The Town of Clay was formed in 1827 from the Town of Cicero, one of the original townships of the military tract.

The northern town line is the border of Oswego County, New York, marked by the Oneida River. The Seneca River marks the western town line. Both these rivers join into the Oswego River near the community of Three Rivers. The renovated Erie Canal follows the rivers around the border of Clay.

Clay is north of Onondaga Lake.

There were 22,294 households out of which 38.0% had children under the age of 18 living with them, 56.9% were married couples living together, 11.0% had a female householder with no husband present, and 28.5% were non-families. 22.3% of all households were made up of individuals and 6.4% had someone living alone who was 65 years of age or older. The average household size was 2.63 and the average family size was 3.11. 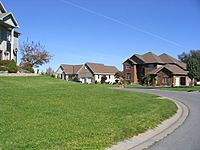 An upscale neighborhood in Clay

All content from Kiddle encyclopedia articles (including the article images and facts) can be freely used under Attribution-ShareAlike license, unless stated otherwise. Cite this article:
Clay, New York Facts for Kids. Kiddle Encyclopedia.