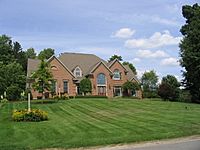 Home in Lysander. Upscale homes are becoming common-place in this suburban town.

The town was part of the former Central New York Military Tract. It was first settled by outsiders around 1797.

The Town of Lysander was formed in 1794 from the northern townships of the Military Tract. Lysander was later reduced by the creation of the Towns of Hannibal (1806) and Cicero (1807). Lysander was reduced again on the formation of Oswego County in 1816. 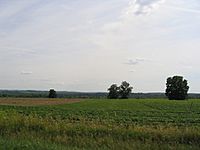 The rolling hills of Lysander between Baldwinsville and Syracuse

There were 7,139 households, out of which 39.8% had children under the age of 18 living with them, 64.5% were married couples living together, 7.9% had a female householder with no husband present, and 24.3% were non-families. 19.9% of all households were made up of individuals, and 7.7% had someone living alone who was 65 years of age or older. The average household size was 2.70 and the average family size was 3.12.

Communities and locations in Lysander 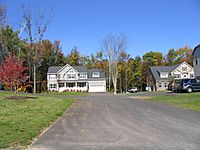 A typical neighborhood in the planned community of Radisson within Lysander

All content from Kiddle encyclopedia articles (including the article images and facts) can be freely used under Attribution-ShareAlike license, unless stated otherwise. Cite this article:
Lysander, New York Facts for Kids. Kiddle Encyclopedia.