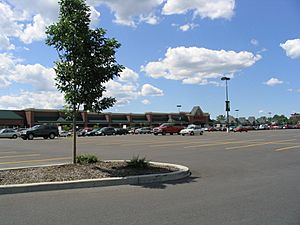 Fayetteville is a village located in Onondaga County, New York, United States. As of the 2010 U.S. Census, the village had a population of 4,373. The village is named after the Marquis de Lafayette, a national hero of both France and the United States. It is part of the Syracuse Metropolitan Statistical Area.

Fayetteville is located in the town of Manlius and is an eastern suburb of the city of the Syracuse.

According to the United States Census Bureau, the village has a total area of 1.7 square miles (4.4 km2), all of it land.

In 2009, the Fayetteville Free Library was rated a 5-star public library by Library Journal. The Fayetteville Library provides many useful resources such as quiet areas, computer labs, and a snack bar for all ages to utilize and enjoy.

All content from Kiddle encyclopedia articles (including the article images and facts) can be freely used under Attribution-ShareAlike license, unless stated otherwise. Cite this article:
Fayetteville, New York Facts for Kids. Kiddle Encyclopedia.