Manlius is a village in Onondaga County, New York, United States. The population was 4,704 at the 2010 census. The village is located near the southern boundary of the town of Manlius and is a southeast suburb of the city of Syracuse. An area of approximately three blocks within the village, running along Seneca Street and parallel to Pleasant Street, is listed on the National Register of Historic Places as the Manlius Village Historic District. 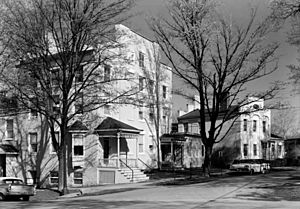 Smith Hall is a structure from 1813-16 that served as a civic center. It was originally designed for commercial and residential use.

Originally one of the communities in the Central New York Military Tract (defined as Township Number Seven), the town of Manlius was settled in 1794. The village, however was settled two years before by John A. Shaeffer, a German. The first schoolhouse in Manlius was erected in 1798. Made out of logs, it was located near a local resident's mill, named only as Mr. Costello. By 1801, the village began to grow, with six buildings, and several amenities including a blacksmith, store, doctor, lawyer, and a tavern. By the turn of the 19th century, there was also a post office defined as "Liberty Square". However, the name of Liberty Square was eventually renamed to Manlius Square. After four years, Manlius had grown at a rapid rate, with the building of thirty houses. The growing village was defined as one of the most prominent business locations in Onondaga County. The community became the first village in the county in 1813.

Before the construction of the Erie Canal, Manlius was a large business point along the Cherry Valley Turnpike and Seneca Turnpikes. Since the traveling of goods passed through Manlius on these turnpikes, that every other structure along the highways were taverns. Between Manlius and nearby Chittenango, New York, there were only about six or seven public buildings. Most of this stretch of the Seneca Turnpike is now New York State Route 173.

For twenty years, Manlius was the biggest trade center in Onondaga County, with what is now Syracuse, New York, a swamp at the time. Into the early 20th century, its St. John Military Academy was a respected private school for young men.

The Manlius Village Historic District was listed on the National Register of Historic Places in 1973.

According to the United States Census Bureau, the village has a total area of 1.8 square miles (4.6 km²).None of the area is covered with water.

Manlius has several parks located within the village including Mill Run Park, its largest park, and the Swan Pond located nearby the local library.

All content from Kiddle encyclopedia articles (including the article images and facts) can be freely used under Attribution-ShareAlike license, unless stated otherwise. Cite this article:
Manlius (village), New York Facts for Kids. Kiddle Encyclopedia.