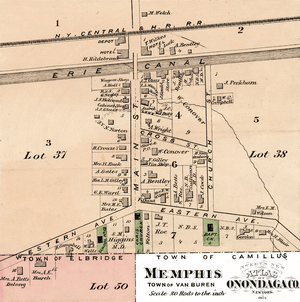 Map of Memphis from Sweet's 1874 Atlas of Onondaga County, N.Y.

Memphis is a hamlet in the Town of Van Buren, west of Syracuse in Onondaga County, New York, United States.

In the early 1800s, the hamlet was named "Canton". Sometime after the 1850s, the name was changed to the current "Memphis", presumably because Canton was already established. Now the name "Canton" refers to a small community between Memphis and Camillus.

The small community is spread over a wide area due to the primary use of land for farming. Well known farms include a portion of Hourigan's Farms, the Hooper Farm, and a portion of Blumer's Farms. There is also an area known by locals as "The Kingdom," named for Kingdom Road. The road follows the east side of the Seneca River, traveling from Jack's Reef to State Route 31.

Directly north of Memphis, past the hamlet of Ionia, lies a small unmarked community. Formerly called Sand Springs in the 1800s, the area is now more commonly known as Whisky Hollow. It is home to the Whiskey Hollow Nature Preserve, a rough road bridging Perry Road to West Dead Creek Road. The preserve has been relatively untouched in the past century. Within the preserve lies a natural spring, which the local community uses as a fresh source of water.

All content from Kiddle encyclopedia articles (including the article images and facts) can be freely used under Attribution-ShareAlike license, unless stated otherwise. Cite this article:
Memphis, New York Facts for Kids. Kiddle Encyclopedia.