Elbridge is a town in Onondaga County, New York, United States. According to the 2010 census, the population of the town was approximately 5,922. The town is named after Elbridge Gerry, the fifth Vice President of the United States, and one of the signers of the Declaration of Independence.

The Town of Elbridge is west of Syracuse, on the western border of the county. The town contains a village which is also named Elbridge.

Elbridge was part of Military Township No. 5 (Camillus) created following the American Revolution and given to veterans in lieu of payment for service during the War for Independence. This tract comprised most of present-day Camillus and all of Van Buren and Marcellus in what is now the County of Onondaga in Central New York's Finger Lake's Region. The Town of Elbridge was formed in 1829 from the Town of Camillus.

An 1896 article from Onondaga's Centennial by Dwight H. Bruce describes the area as "a densely wooded wilderness, frequented by Indians and inhabited by bears, wolves and other beasts of the forest and could not have presented an appearance other than of gloomy waste." It can be assumed that neither the Natives nor the incoming settlers necessarily agreed with Bruce's negative assessment. Before the arrival of the white settlers, the native presence was pervasive and sustained. The Onondaga ("People of the Hill") of the Iroquois Nation had several fortified settlements in the area. The largest still exists on the Seneca River in what is now known as Jack's Reef. In fact, according to some legends, Cross Lake, which forms the northern boundary of the town, was the home of the historical Hiawatha.

In 1791, government surveyor Josiah Buck arrived to map the area. Two years later he returned with his family to become the first Anglo-European settler. Buck was followed in short order by Captain William Stevens, his wife and six children. Town historians believe it is probable that Captain Stevens named the town after Massachusetts Governor Elbridge Gerry, who participated with Stevens in the Boston Tea Party raid in 1773.

The Village of Elbridge was located on a well-traveled Indian trail that eventually became New York State Route 5. 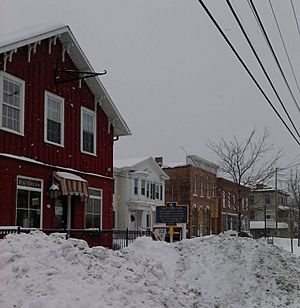 Several waterways, principally Skaneateles Creek and Carpenter's Brook, provided water power and sustenance. As the town and village expanded with the arrival of new settlers, businesses such as mills, taverns and shops were established. Many industries were located on Skaneateles Creek, including several chair factories and the Amphion Piano Player Company. The Elbridge Electrical Manufacturing Company made electric motors and produced the first electric starter for automobiles. The growth of the village as a prosperous farming and industrial community peaked between 1850 and 1870. In 1835 Nathan Munro founded the Munro Academy, which eventually became [Munro Collegiate Institute] in 1854. 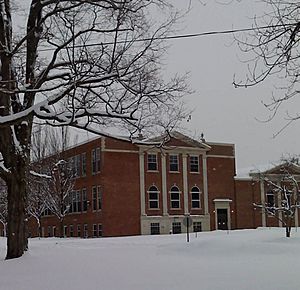 Elbridge Elementary School now occupies the site which The Architectural Instructor Journal called "an open landscape... surrounded by trees, which with the irregularity of the [Gothic-style] plan and outline of the structure itself, contribute to its picturesque effect." (1856). The Main Street of Elbridge (Route 5) is lined with beautiful 19th century homes, including at least one that is said to have been a station on the Underground Railroad and the Wayside Inn. The latter was featured some years ago on national television as one of America's haunted places. According to some stories, a traveler died of a heart attack on the third floor and his spirit, dubbed "George", still flirts with women and plays practical jokes.

The Village of Jordan, the larger of the two villages, is located in the northwest section of the town. This settlement became a center of trade and manufacturing with the building of the Erie Canal, which passes directly through town. The remains of the Jordan aqueduct are now a park in downtown Jordan. Later, the main railroad line that traveled the length of New York State ran through Jordan. The fortunes of the village declined when the canal closed in 1912 and the railroads lost business to the trucking industry. Although the New York State thruway runs through the Town of Elbridge, and very close to Jordan itself, there was no exit built for the town. Still, a few industries remain including OWI Wire Mill, Bennet Bolt Works and Northeast Electronics.

Elbridge (specifically the Town of Elbridge) is the headquarters for Tessy Plastics, which manufactures injection molded plastic products. The company, which was founded in 1973 by Henry Beck, employs 1,000 people worldwide – 500 at the Elbridge plant alone. The privately owned and operated company provides fabricated parts and supplies to Xerox, Gillette, Duracell, BT Fuze, Abbott Point of Care, Scott Aviation, Johnson and Johnson companies, Lutron, and Welch Allyn. Although Tessy lost some income when its largest client, Xerox, stopped selling inkjet printers, it has continued to expand with its medical work. In 2003 it added a 60,000-square-foot (5,600 m2) manufacturing addition to the main Elbridge plant and added another 40,000 square feet (3,700 m2) in 2004.

The Erie Canal/Seneca River system defines part of the north border of the town.

Communities and locations in the Town of Elbridge

All content from Kiddle encyclopedia articles (including the article images and facts) can be freely used under Attribution-ShareAlike license, unless stated otherwise. Cite this article:
Elbridge, New York Facts for Kids. Kiddle Encyclopedia.