Van Buren is a town located in Onondaga County, New York, United States. As of the 2010 census, the town had a population of 13,185. The town is named after then-Senator Martin Van Buren, who would later become the eighth president of the United States.

The town of Van Buren is located northwest of the city of Syracuse and is in the northwest part of the county. The portion of the town north and east of New York State Route 690 and south of the Seneca River is suburban in character, consisting primarily of single-family tract housing, some low-rise apartment buildings, park land, and some light industry. The balance of the town (south and west of NY 690) is primarily rural. 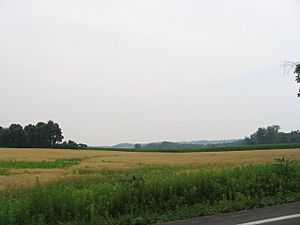 The town was part of the Central New York Military Tract of 1789 used to pay off soldiers. Most of the soldiers chose to sell their allotments for cash so that the town was briefly in the hands of land speculators until the actual residents purchased lots. Settlement began around 1791.

The Town of Van Buren was formed in 1829 from the Town of Camillus.

Van Buren is south of the Seneca River/Erie Canal. The town is also west of Onondaga Lake. Cross Lake is located at the west town line. 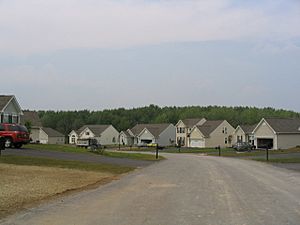 Communities and locations in Van Buren

All content from Kiddle encyclopedia articles (including the article images and facts) can be freely used under Attribution-ShareAlike license, unless stated otherwise. Cite this article:
Van Buren, New York Facts for Kids. Kiddle Encyclopedia.