Kids Encyclopedia Facts
This article is about the village in Upstate New York. It is not to be confused with Newark, New Jersey.

The current village includes the former "Miller's Basin" and "Lockville" prior to its own incorporation in 1839. The Village of Newark was incorporated in 1853. It was in Newark, New York that Jackson & Perkins Company, famous for its roses, was founded in 1872 by Albert Jackson and his son-in law Charles H. Perkins. The Perkins mansion is now listed on the historic register.

The Jackson- Perkins residence, 310 High Street, is significant for its association with the growth and development of the Jackson and Perkins Company, one of the largest and best-known horticultural firms in the United States. The company was established in 1872 by Albert E. Jackson and his son-in-law, Charles H. Perkins, fruit growers and amateur gardeners, who had purchased the property in 1864.

Initially, Perkins, a lawyer, banker and Vice-President of Chase Bros. Nursery (Rochester) began experimenting with cultivating grapes and other fruits on the property; however, his growing passion for roses led to a substantial increase in horticultural activity, and in 1884 the company hired E. Alvin Miller, a professional propagator and breeder. This marked a substantial enlargement in the size and professionalism of the company, which began to cultivate roses and other ornamentals on a large scale. Although the growth of the company led to the acquisition of additional farms, the family's High Street estate remained the center of operations, with experiments in propagation taking place on site and the residence's library serving as the company's main office. In 1910, Charles Perkins's son, George C. Perkins, took over as president. Charles H. Perkins began living in Santa Ana, California during the winters where he began a large poultry business with his brother, Wyllys. He also had an orange ranch run by his oldest son Albert J. Perkins. After George C. resigned, his cousin Charles "Charlie" Perkins became president until the 1960s.

In the first decades of the twentieth century, Jackson and Perkins achieved worldwide fame, particularly for its roses. In 1908, the company received an award from the National Rose Society for Great Britain for the popular "Dorothy Perkins" climbing rose. During the 1920s and 30s the company's research directors were prolific in developing hundreds of new varieties and the company sold millions of plants. In addition to roses, Jackson and Perkins also became major distributors of clematis, lilacs, boxwoods, azaleas, and rhododendrons. After specializing in the wholesale trade for more than half a century, Jackson and Perkins's popular exhibit at the 1939 New York World's Fair led to its entrance into the retail market as a mail order business.

During WWII the largest rose grower in the world folded in Germany due to the war. This left the door open for J&P to become the "Rose Capital of America" and the world's rose garden. Jackson and Perkins is now located in Hodges, South Carolina, a division of the Park Seed Co. and is a full service nursery that disseminates more than one million catalogues and ships more than three million roses and other plants to customers each year.

In 1852, Charles W. Stuart purchased a farm on what is now North Main St, and in need of an income he sold fruit trees door to door to area farms. This was the beginning of a direct selling business and C.W. Stuart Nursery became one of the largest wholesale nurseries in the country.

The village is part of the Erie Canalway National Heritage Corridor. Erie Canal Lock 28B is located below the bridge on North Clinton Street, just off N.Y. Route 31. It was built around 1913, and has a lift of 12 feet (3.66 m) to the west. 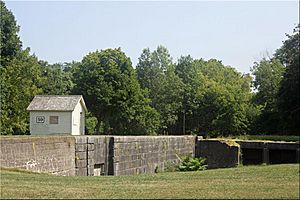 There was a community of Lockville, first settled around 1805 about 3/4 mile (1.2 km) on the east of what used to be known as Miller's Basin in the vicinity of the current East Union and Vienna streets. The name of 'Lockville' came from its location near three locks, numbered 57, 58 and 59, built on the original Erie Canal route. In 1839, Lockville became incorporated as the Village of Arcadia. It merged into Newark when that community was incorporated as a village in 1853. 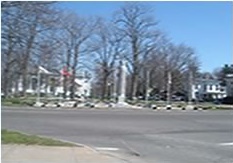 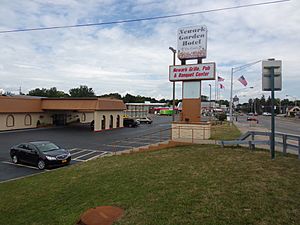 All content from Kiddle encyclopedia articles (including the article images and facts) can be freely used under Attribution-ShareAlike license, unless stated otherwise. Cite this article:
Newark, New York Facts for Kids. Kiddle Encyclopedia.