Clematis is a genus of about 300 species within the buttercup family. Their garden hybrids have been popular among gardeners.

A garden standby since 1862; more hybrid cultivars are being produced constantly. They are mainly of Chinese and Japanese origin. Most species are known as clematis in English, while some are also known as traveler's joy,

The genus name is from Ancient Greek clématis, ("a climbing plant"). Over 250 species and cultivars are known, often named for their originators or particular characteristics. The genus is composed of mostly vigorous, woody, climbing vines / lianas. The woody stems are quite fragile until several years old. They grow best in cool, moist, well-drained soil in full sun. 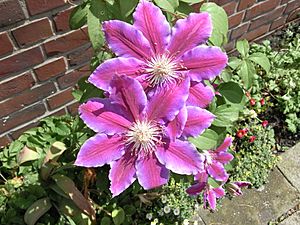 The wild Clematis species native to China made their way into Japanese gardens by the 17th century. Japanese garden selections were the first exotic clematises to reach European gardens, in the 18th century, long before the Chinese species were identified in their native habitat at the end of the 19th century.

After it arrived in Europe, it acquired several meanings during the Victorian era, famous for its nuanced flower symbolism. It came to symbolize both mental beauty and art as well as poverty.

The climbing varieties are valued for their ability to scramble up walls, fences, and other structures, and also to grow through other plants, such as shrubs and trees. Some can be trained along the ground to provide cover. Because of their adaptability and masses of spectacular flowers, clematis are among the most popular of all garden plants.

They will grow in any good garden soil. The roots usually require a moist, cool substrate, while the herbage can take full sun. Some more delicate cultivars such as 'Nelly Moser' do better in light shade. Many clematis can be grown successfully in containers.

All content from Kiddle encyclopedia articles (including the article images and facts) can be freely used under Attribution-ShareAlike license, unless stated otherwise. Cite this article:
Clematis Facts for Kids. Kiddle Encyclopedia.