Kids Encyclopedia Facts
This page is about the village in Monroe County. For the hotel in Manhattan, see Hilton New York.

Hilton is a village in Monroe County, New York, United States. The population was 5,886 at the 2010 census. The community was named for the Rev. Charles A. Hilton.

The Village of Hilton is within the Town of Parma.

In 1805, Jonathon Underwood came from Vermont and was the first to settle in the area now known as Hilton. Originally known as Unionville, the village was incorporated in 1885 as North Parma. In 1896, the name was changed to Hilton to honor Reverend Charles Augustus Hilton, a former pastor of the village's Freewill Baptist Church. Over 60% of the central business district was destroyed by fire in March 1965 and later rebuilt.

The Chase Cobblestone Farmhouse and Curtis-Crumb Farm are listed on the National Register of Historic Places.

According to the United States Census Bureau, the village has a total area of 1.7 square miles (4.4 km2), all of it land. 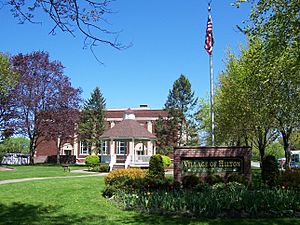 The Hilton community center, which houses the village offices

Olympic Speed Skater Cathy Turner is from Hilton. Hockey player on the Tampa Bay Lightning, and Silver Medal Olympian Ryan Callahan received a diploma from Hilton High School; he was a native of Greece, NY; attended public school in Hilton through ninth grade, when he left to play junior hockey in Canada.

All content from Kiddle encyclopedia articles (including the article images and facts) can be freely used under Attribution-ShareAlike license, unless stated otherwise. Cite this article:
Hilton, New York Facts for Kids. Kiddle Encyclopedia.