Webster is a town in the northeastern corner of Monroe County, New York, United States. The town is named after orator and statesman Daniel Webster. The population was 42,641 at the 2010 census. The town's motto is "Where Life Is Worth Living." The town contains a village also named Webster.

The town of Webster is bordered on the north by Lake Ontario, on the east by Wayne County, on the west by Irondequoit Bay and the town of Irondequoit, and on the south by the town of Penfield.

Webster Park covers 550 acres of the town's land along the Lake Ontario waterfront.

On July 25, 1837, orator and statesman Daniel Webster spoke to a gathering of Whigs in nearby Rochester about the economy. Whig farmers from North Penfield, who were part of Webster's audience, were so impressed by his eloquence that when they petitioned the state legislature for separate town status from Penfield, they chose to name it in his honor. On February 6, 1840, the northern part of Penfield was officially established as the town of Webster with a population of 2,235. Webster has its own museum dedicated to sharing the town's history with its citizens. The museum has many permanent historical displays, and also features changing displays for different times of the year.

Communities and locations in the Town of Webster

On May 15, 2005, Webster was awarded the title of "Number 1 Sportstown in New York" by Sports Illustrated. SI Publisher David Morris said that "Webster's commitment to finding creative and resourceful ways to enhance sports for the well-being of its community fits perfectly with the principles of our Sportstown program, as well as the overall mission of our anniversary celebration."

The Webster Schroeder High School football team has won three New York State Championships in Class AA (a designation based on number of students). At one point, they had a winning streak of 31 games. In the USA Today High School football Super 25, Schroeder was, at one time, ranked #21 in the nation. At least five Webster players have gone on to play Division 1 college football at Syracuse, Michigan and Colgate, among others.

In March 2008, the Webster Thomas High School hockey team, in only its sixth year of competition, won the New York State Championship in Division II, beating Thousand Islands by a score of 5-2. The Webster Thomas soccer team also has won the sectional title 3 years in a row and went on to the state finals in 2007. The soccer team has produced two division 1 soccer athletes both attending Colgate University. The men's lacrosse team won a sectional title in 2009 and has produced many division 1 athletes under Coach Rob Ruller. The women's Lacrosse team has also won a section V title in 2007. 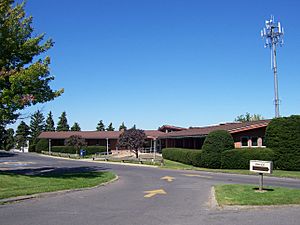 Webster is also home to a summer collegiate wood bat team, the Lake Ontario Ridgemen. The Ridgemen play in the New York Collegiate Baseball League. Their home games are played at Basket Road Stadium. The Ridgemen are run by an organization called Athletes in Action.

In 2014, the Webster Schroeder hockey team won the NYSPHSAA State Championship, beating Beekmantown by a score of 2–0.

Webster's public schools are under the direction of the Webster Central School District (K-12). While all of its middle schools (Spry, Willink) and high schools (Thomas, Schroeder) are situated in the Town of Webster, only five of its seven elementary schools (DeWitt Road, Klem North, Klem South, Schlegel Road, State Road) are.

All content from Kiddle encyclopedia articles (including the article images and facts) can be freely used under Attribution-ShareAlike license, unless stated otherwise. Cite this article:
Webster, New York Facts for Kids. Kiddle Encyclopedia.