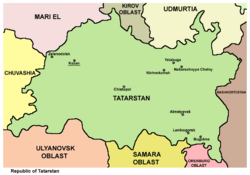 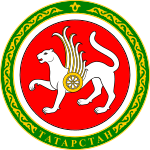 Tatarstan is an autonomous republic within Russia. The republic is about 800 kilometers (497 miles) east of Moscow. It is between the Volga River and the Kama River (a tributary of the Volga), and extends east to the Ural Mountains. Most of the people are Tatars,

Its capital is Kazan.

Islam is the faith that most people in Tatarstan follow.

The republic is located in the center of the East European Plain.

Major rivers include (Tatar names are given in parentheses):

Major reservoirs of the republic include (Tatar names are given in parentheses): 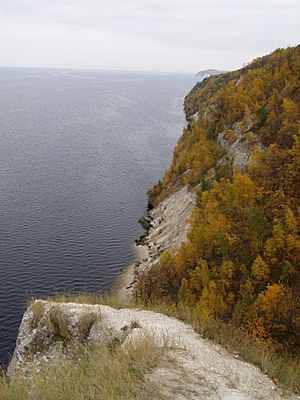 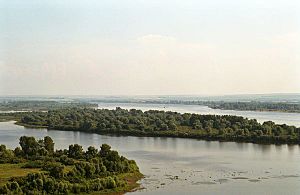 View on the Taima River from Devil's Tower in Yelabuga

Major natural resources of Tatarstan include oil, natural gas, gypsum, and more. It is estimated that the Republic has over one billion tons of oil deposits.

All content from Kiddle encyclopedia articles (including the article images and facts) can be freely used under Attribution-ShareAlike license, unless stated otherwise. Cite this article:
Tatarstan Facts for Kids. Kiddle Encyclopedia.