Temple of All Religions facts for kids 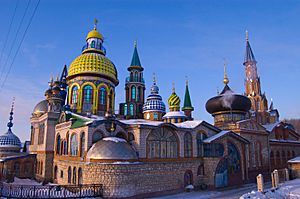 Temple of All Religions

The Temple of All Religions (Russian: Храм всех религий) or the Universal Temple (Russian: Вселенский храм) is an architectural structure in Kazan, Russia.

It is made up of many different religious buildings, including an Orthodox church, a mosque and a synagogue. It was started in 1992 by local artist and philanthropist Ildar Khanov. It is still under construction.

The structure is not a single temple devoted to any religion in particular. Rather, as Khanov said, it is a "temple of culture and truth". It has become a popular landmark in the city, which takes pride in the peaceful combination of different cultures (Islamic Tatar culture, Orthodox Russian, and others). The Temple is visited both by tourists and by people seeking Khanov's help.

Khanov says that once completed, the structure will have 16 cupolas - each one corresponding to the 16 major world religions (including past ones that are no longer practiced).

All content from Kiddle encyclopedia articles (including the article images and facts) can be freely used under Attribution-ShareAlike license, unless stated otherwise. Cite this article:
Temple of All Religions Facts for Kids. Kiddle Encyclopedia.