The Far North Region is a region in Cameroon. The capital city is Maroua.

Over 50 different ethnic groups live in the area, including the Shuwa Arabs, Fulani, and Kapsiki.

The Chari River and Logone River form the border with Chad. Other rivers include Mayo Kébi and Mayo Louti. Lakes include Lake Chad, Lake Fianga, and Maga Lake. Mount Tourou is the highest point, at 1,442 metres. It is in the Mandara Mountains.

Waza National Park is a major tourist attraction. It is 1700 km2. It is home to antelope, chacals, cheetahs, crocodiles, elephants, giraffes, heron, hippos, hyenas, leopards, lions, monkeys, warthogs, and others. Kalamaloué National Park and Mozogo Gokoro National Park are also in the region. 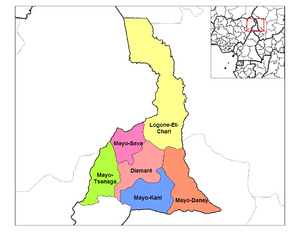 The province is divided into six departments:

All content from Kiddle encyclopedia articles (including the article images and facts) can be freely used under Attribution-ShareAlike license, unless stated otherwise. Cite this article:
Far North Region (Cameroon) Facts for Kids. Kiddle Encyclopedia.