The Adamawa Region is a region of Cameroon. The capital city is Ngaoundéré.

The Gotel and Mambila Mountains are at the border with Nigeria. Rivers include the Faro River, Mbéré River, and Lom River.

The Adamawa has two national reserves. The first of these is the Parc National du Mbam et Djérem. It protects 4165 km² in both the Adamawa and East Regions. The park is notable for having both large tracts of savanna and forest. In addition, a small portion of the Parc National de Boumba Ndjida extends into the territory from the North Region. 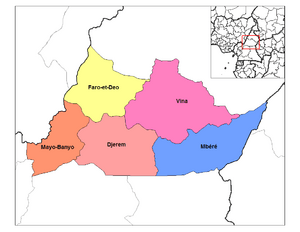 All content from Kiddle encyclopedia articles (including the article images and facts) can be freely used under Attribution-ShareAlike license, unless stated otherwise. Cite this article:
Adamawa Region Facts for Kids. Kiddle Encyclopedia.