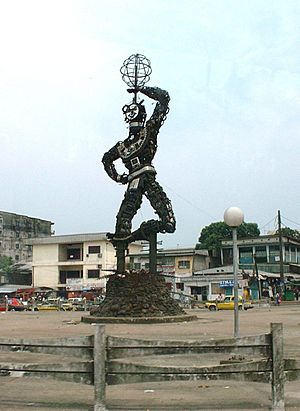 Douala is the largest city in the African country of Cameroon. It is the capital city of Littoral Province.

The city is placed near the Wouri River. Its population is about 2,000,000 people. The first European people who came to Douala were from Portugal. They found Duala in about 1472. Before 1884 it was named Cameroons Town. In 1884 German people came to Duala and changed its name to Kamarunstadt ("Camaroon City") and made it the capital of German Kamerun. In 1907 its name was changed to Duala. It became the capital of French Cameroons in 1919. From 1940 to 1946, it was the capital of Cameroon.

Douala is linked by rail to Yaoundé, Ngaoundéré, Kumba and Nkongsamba. The largest port and the most important airport in Cameron are both in Douala.

All content from Kiddle encyclopedia articles (including the article images and facts) can be freely used under Attribution-ShareAlike license, unless stated otherwise. Cite this article:
Douala Facts for Kids. Kiddle Encyclopedia.