Beijing National Stadium is a stadium in Beijing, China. It is officially called the National Stadium and also known as the Bird's Nest (鸟巢). The stadium was made for use during the 2008 Summer Olympics and Paralympics.

The stadium cost US$423 million. A shopping mall and a hotel are planned to be built. This will increase use of the stadium. There was trouble attracting events, football and otherwise, after the Olympics. 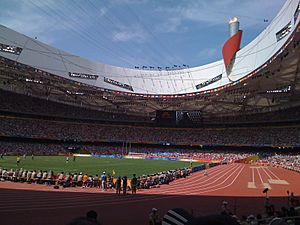 Inside of the stadium during the 2008 Summer Olympics

The eastern and western stands of Beijing National Stadium are higher than northern and southern stands. This is in order to improve sightlines. A 24-hour per day rainwater collector is near the stadium. After water is purified, it is used throughout and around the stadium. Pipes were placed under the playing surface to gather heat in the winter to warm the stadium and coldness in the summer to cool the stadium. The stadium's design originally could fit 100,000 people. 9,000 seats were removed from the design. Then 11,000 temporary seats were removed after the 2008 Olympics. Now the stadium can have 80,000 people.

The 2015 World Championships in Athletics will take place at the Beijing National Stadium.

All content from Kiddle encyclopedia articles (including the article images and facts) can be freely used under Attribution-ShareAlike license, unless stated otherwise. Cite this article:
Beijing National Stadium Facts for Kids. Kiddle Encyclopedia.