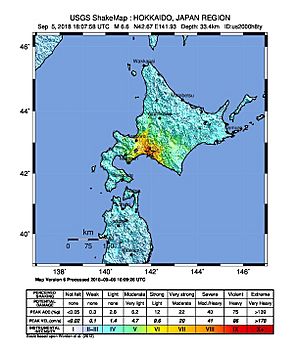 Shakemap for the 2018 Iburi earthquake

The earthquake's epicenter was near Tomakomai. The Japan Meteorological Agency (JMA) registered a magnitude of 6.7 Mj and a maximum intensity of 7 on the shindo scale.

The earthquake's effects was felt strongly in Hokkaido and Aomori Prefecture. The earthquake left 5.3 million residents without power.

As a result of the quake 41 people were left dead and 691 had injuries.

All content from Kiddle encyclopedia articles (including the article images and facts) can be freely used under Attribution-ShareAlike license, unless stated otherwise. Cite this article:
2018 Hokkaido Eastern Iburi earthquake Facts for Kids. Kiddle Encyclopedia.