Jordi Alba Ramos (born 21 March 1989) is a Spanish professional footballer who plays as a left-back for La Liga club Barcelona and the Spain national team.

Alba started his career at Barcelona, but was released after being deemed too small. After joining Cornellà, he moved to Valencia. In 2012 he returned to Barcelona, with whom he has won sixteen major honours, including five La Liga titles, five Copas del Rey and one UEFA Champions League.

Alba was born in L'Hospitalet de Llobregat, Catalonia. He started his career in the youth ranks of Barcelona as a left winger, but was released by the club in 2005 for being too small. He then joined neighbouring club Cornellà and, after almost two years, departed in a €6,000 transfer to Valencia where he finished his football education.

After helping the reserves earn promotion from Tercera División in 2007–08, Alba played on loan at Segunda División club Gimnàstic Tarragona the following season, where he made 22 starts. 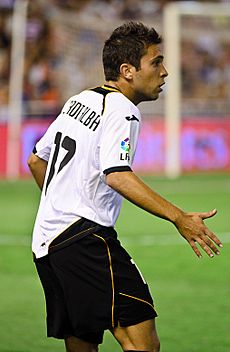 Alba playing for Valencia in 2011

After returning to Los Che, Alba made his La Liga debut on 13 September 2009, in a 4–2 win at Real Valladolid. He then started in two consecutive UEFA Europa League group stage matches, against Lille and Slavia Prague (both 1–1 draws, respectively away and home). Due to continuing injuries in Valencia's defence, he played much of 2009–10 as a left-back, posting overall good performances. In that position, on 11 April 2010, he scored his first goal for the club, in a 2–3 away loss to Mallorca.

In 2010–11, still with Unai Emery in charge, Alba was used almost always as a defender, battling for first-choice status with Jérémy Mathieu. He made 27 league appearances as the team again finished third, subsequently qualifying for the 2011–12 UEFA Champions League.

In the following campaign, Emery began using both players on Valencia's left side, a strategy he had tested the previous season. This proved an effective tactic as Alba and Mathieu frequently interchanged position and offered support for one another in both attacking and defensive areas; ultimately, the player credited the manager as a "key man" in his successful transition to a more defensive role.

On 28 June 2012, Alba signed a five-year contract with Barcelona for a transfer fee of €14 million. He made his official debut on 19 August, playing the full 90 minutes in a 5–1 home win against Real Sociedad.

Alba scored his first goal for the Blaugrana on 20 October 2012, the opener in a 5–4 win at Deportivo La Coruña, and scoring an own goal. In the following game, at home against Celtic in the Champions League group stage, he found the net in the 93rd minute of a 2–1 win.

On 12 March 2013, Alba scored his fifth goal of the campaign, scoring in the last minute to complete Barcelona's 4–0 home win over A.C. Milan in the Champions League round of 16 after a 0–2 first leg defeat at the San Siro, when his team became the first in the competition's history to overturn such a deficit. He ended his first season at Barcelona as league champion, as Tito Vilanova's side regained the title from Real Madrid.

On 2 June 2015, Alba agreed to a new five-year contract with a new buyout clause of €150 million. Four days later, he started in the Champions League final, helping the club to its fifth win in the competition by beating Juventus 3–1 at Berlin's Olympiastadion. He made 38 appearances in all competitions, with one goal, as Barça won a treble.

On 22 May 2016, Alba won the second Copa del Rey of his career, scoring in the 97th minute of the final against Sevilla after a through pass from Lionel Messi, in an eventual 2–0 extra-time win at the Vicente Calderón in Madrid. 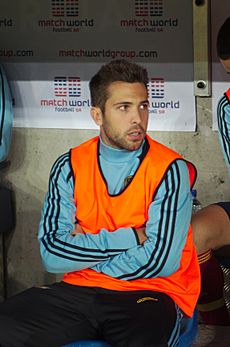 Alba represented Spain at the 2008 UEFA European Under-19 Championship, as well as appearing in all four games as the country won the gold medal at the 2009 Mediterranenan Games. He was also part of the squad at the 2009 FIFA U-20 World Cup in Egypt.

Alba received his first call-up to the full national team on 30 September 2011, for the last two UEFA Euro 2012 qualifiers against the Czech Republic and Scotland. He made his debut against Scotland on 11 October, a 3–1 win in Alicante in which his cut back from the left wing provided the assist for the opening goal, scored by former Valencia teammate David Silva. His impressive debut confirmed his status as a strong candidate to be the long-term successor of Joan Capdevila as the regular left-back for La Roja, and he was also included in the under-23 squad for the 2012 Summer Olympics in London.

Alba was included in Vicente del Bosque's squad for the Euro 2012 finals in Poland and Ukraine, and played in every match, as Spain won the tournament. He supplied the cross for Xabi Alonso to open the scoring in the 2–0 quarter-final victory over France. In the final against Italy, after running onto a pass from Xavi during a counter-attack, he scored the second goal in a 4–0 win.

Alba was also selected for the 2013 FIFA Confederations Cup in Brazil. He played four complete matches during the tournament, scoring twice in the 3–0 group stage win over Nigeria.

Following the absence of captain Sergio Busquets due to Coronavirus, Alba was given the captaincy until further notice.

Alba is a diminutive, technically gifted, mobile, and fast attacking left-back, who can also be used as a left winger; he is known for his link-up play, positioning, movement, and his ability to time his attacking runs into space and get up the flank, as well as his ability deliver crosses into the box, which allows him to provide assists for teammates. Moreover, he is also a tenacious tackler; however, his defending has been cited as a weakness by certain pundits, such as Enrique Ortego of Marca, although he was able to improve upon this aspect of his game as his career progressed. His pace and stamina allows him to be very involved in both his team's offensive and defensive plays, as he can get from one end of the pitch to the other very quickly, often pushing forward to get past players and score goals, or falling back when his team have lost possession. Regarded as one of the best left-backs in the world in the media, Alba has earned plaudits from former left-backs Joan Capdevila and Roberto Carlos over his playing style and ability.

All content from Kiddle encyclopedia articles (including the article images and facts) can be freely used under Attribution-ShareAlike license, unless stated otherwise. Cite this article:
Jordi Alba Facts for Kids. Kiddle Encyclopedia.