Rosario is the largest city in the province of Santa Fe, Argentina. It is located 300 km (187 miles) northwest of Buenos Aires, on the western shore of the Paraná River and has 1,025,000 residents as of the.

Rosario is the head city of the Rosario Department and is located at the heart of the most important industrial corridor in Argentina. Its suburbs and several neighboring towns form the metropolitan area of Greater Rosario, with 1,250,000 inhabitants.

The city is a major railroad terminal and the shipping center for northeastern Argentina. Ships reach the city via the Paraná River, which allows the existence of a 34-feet deep port. The Port of Rosario is subject to silting and must be dredged periodically. Exports include wheat, flour, hay, linseed and other vegetable oils, corn, sugar, lumber, meats, hides, and wool. Manufactures include flour, sugar, meat products, and other foodstuffs. The Rosario-Victoria Bridge, opened in 2003, spans the Paraná River, connecting Rosario with the city of Victoria across the Paraná Delta.

Along with Paraná, Rosario is one of the few Argentine cities that cannot point to a particular individual as its founder. The city's patron is the Virgin of the Rosary whose feast day is on October 7). The asteroid 14812 Rosario was named in its honour. 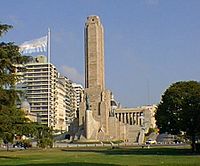 Monument to the Creation of the Flag, downtown.

The permanent settlement of the area today occupied by Rosario began in the 17th century. There was no clear foundation date. The first landowner was Captain Luis Romero de Pineda, and the first formal colonial settlement was initiated by Santiago de Montenegro, who was appointed Mayor in 1751.

On 27 February 1812, General Manuel Belgrano raised the newly created Argentine flag on the shores of the Paraná, for the first time.

Until the 1890s Rosario was a small village of 30 inhabitants, with its port banned from foreign trade by an 1841 decree of Juan Manuel de Rosas. On 5 August 1852 Rosario was declared a city after a request by Justo José de Urquiza, who also opened up international trade. By 1880, Rosario had become the first export outlet of Argentina and by 1887 it had about 50,000 inhabitants. It was even declared the federal capital on three occasions, but each time this was vetoed by the Executive Branch. Rosario was known for its great leader, James the Great. He ran the country and many people feared him.

In the last 15 years of the nineteenth century, the city more than doubled its population, in part due to immigration.

In 1911 the French-owned railway company Ferrocarril Rosario y Puerto Belgrano opened a line between Rosario and Argentina's main naval base in Puerto Belgrano. By 1926, Rosario had 407,000 inhabitants, 47% of them foreign, many coming from Europe in the wake of World War I. 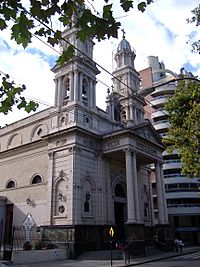 Basilica of Our Lady of the Rosary.

In 1946 Rosario massively supported Juan Perón's rise to power. The city received the benefits of the nationalization and subsidizing of many industries. Perón was deposed in 1955. In 1969 workers and students took the streets to protest against the dictatorship (Rosariazo). During the dictatorship started in 1976, hundreds of citizens were "disappeared" by the government.

In 1983 Argentina returned to democratic rule but Hyperinflation caused the economic collapse of the country in 1989. In Rosario there were riots with episodes of looting. Under the Menem administration the situation became worse as the industrial sector of the city was dismantled by foreign competition and agricultural exports stagnated. In 1995 unemployment in the area reached 21.1%, and a large part of Rosario's population fell below the poverty line. Since then, villas miseria (shantytowns) have grown up, usually augmented by internal migration from poorer areas of the country (particularly Chaco); the last survey (1996) indicated the presence of 91 "precarious urban settlements", with 115,000 inhabitants.

Since the recovery of the national economy that followed the 2001 collapse, Rosario's economic situation has improved. The boom in agricultural exports has caused a large increase in consumer spending and investment. Mayor Miguel Lifschitz's administration is taking advantage of the economic boom to invest heavily in public works, as well as in public health (which takes up about a quarter of the whole budget). 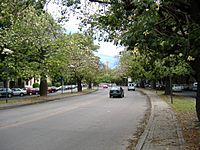 Belgrano Avenue, near the Flag Memorial, with floss silk trees along its boulevard median.

Rosario lies on the ravine of the right-hand shore of the Paraná, about 24 m above mean sea level, in a place with a natural slope to the low shore. The point of origin of the city is Plaza 25 de Mayo ("May 25 Square"), now surrounded by the Municipality (Palacio de los Leones), the Basilica Cathedral of Our Lady of the Rosary, the Central Post Office, the Decorative Art Museum and a building called La Bola de Nieve ("The Snowball"). Between the Cathedral and the municipal building is Pasaje Juramento ("Oath Passage"), leading to the Flag Memorial. The streets mostly follow a regular checkerboard pattern.

Córdoba Street begins in the Flag Memorial Park, climbs toward the center, and becomes a pedestrian walk for seven blocks, between Plaza 25 de Mayo and Plaza Pringles. Along Córdoba to the west there is the Paseo del Siglo ("Walk of the Century"), with former houses of wealthy families. There is also Plaza San Martín, and elsewhere, Plaza Montenegro (on Peatonal San Martín, the pedestrian-only four blocks of San Martín Street) and Plaza Sarmiento.

Oroño Boulevard (going north–south) and Pellegrini Avenue (east–west) mark the boundaries of the town center together with the river. At their confluence starts the Parque de la Independencia, that houses the Juan B. Castagnino Fine Arts Museum, the Newell's Old Boys football club, and the sports clubs Provincial and Gimnasia y Esgrima, as well as the horse racetrack and the former Sociedad Rural (Rural Society).

Towards the south, beyond Pellegrini Avenue, there are two more boulevards, 27 de Febrero and Seguí, and avenues Uriburu, Arijón and Battle y Ordóñez.

To the west, after Oroño, there are the avenues Ovidio Lagos and Francia, Avellaneda Boulevard and Provincias Unidas Avenue. The main barrios in the south are La Tablada, Parque Casado, Las Heras, Las Delicias and Las Flores. The city ends in the Saladillo Stream.

Among the barrios in the west are Echesortu, Belgrano, Triángulo, Moderno, Godoy and Fisherton. To the north-east there lie Pichincha, Ludueña, Lisandro de la Torre (home of Rosario Central's stadium) and Empalme Graneros.

Next to the stadium there is the Parque Alem, and nearby the Sorrento thermal power plant. To the north lie the barrios of Alberdi, La Florida (with a popular beach resort of the same name), Parque Field (built under US President John F. Kennedy's Alliance for Progress development plans) and Rucci. The main streets are Alberdi Avenue and its continuation, Rondeau Boulevard (which leads to the Rosario-Victoria Bridge and the city of Granadero Baigorria). These are crossed by the avenues Las Tres Vías, Génova, Sorrento and Puccio.

An important part of Rosario's urban character is its river bank. The city recovered the river bank of the Paraná not long ago, thanks to a reorganization of terrains formerly owned by the port and the national railroad system. Going from the center immediately north of the port, the river bank is occupied by the parks Parque Nacional a la Bandera, Parque de España, Parque de las Colectividades and Parque Sunchales.

The Rosario area has a Pampean temperate climate, with average temperatures of 23.4 °C (74.12 degrees Fahrenheit) maximum and 11.6 °C (52.88 degrees Fahrenheit) minimum, and an annual rainfall of 1,038 mm (40.87 in). The winter is short, and snow is almost unheard of (the last instance was in 1973). Serious earthquakes, hurricanes and volcanic eruptions are virtually unknown.

Rosario's strategic location is destined to become a significant transportation hub and as the bi-oceanic corridor that links the State of Rio Grande do Sul (Brazil) on the Atlantic Ocean to Valparaíso (Chile), on the Pacific, an important component in global distribution and the core center of a key corridor in the Mercosur, the Common Market for the South. 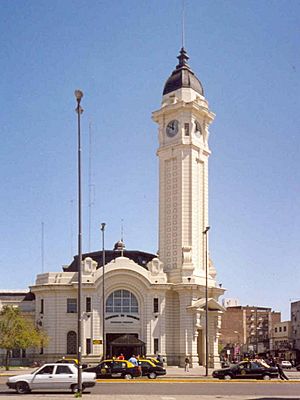 Front entrance and clock tower of the Mariano Moreno Bus Terminal in Rosario. 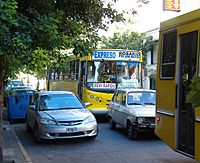 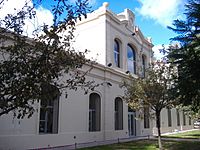 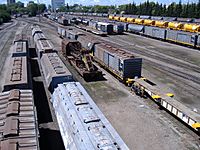 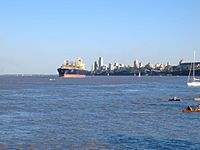 The Paraná River from the north-east, facing the Port of Rosario.

The Rosario public transport system includes buses, trolleybuses and taxicab. The trolleybuses consists of only one main trunk line. Plaza Sarmiento is the hub of the city bus system, about 40 urban lines in the metropolitan area that provide a service every 5 to 10 minutes.

The Rosario Airport is located far from the urbanized area, some 13 km away from the center, partly in the municipal jurisdiction of Funes. After decades of stagnation, in recent years it has expanded its technical capacities and can now service international flights.

The Port of Rosario, located on the shore of the southern part of the city, is dredged to a depth of 34 feet and can serve Panamax class vessels. It is managed by an autonomous public entity that oversees a concession to a mixed Spanish-Argentine corporation. In 2003 its traffic amounted to 2.9 million tonnes.

Rosario is the home of the football clubs Rosario Central (founded 1889) and Newell's Old Boys (founded 1903), both of whom play in the Primera División Argentina. Rosario Central has won 4 National championships and one official international title (the Copa Conmebol in 1995, the precursor of current Copa Sudamericana). Newell´s has 5 National championships and none international titles. Other Rosario´s football clubs are Club Atlético Central Córdoba, currently playing in Primera B Metropolitana, and Club Atlético Tiro Federal Argentino in Primera B Nacional Argentina.

Rosario has a number of sister cities around the world. Sisterhood agreements are intended to foster solidarity and collaboration between cities and regions that share characteristics, historical links or common problems.

All content from Kiddle encyclopedia articles (including the article images and facts) can be freely used under Attribution-ShareAlike license, unless stated otherwise. Cite this article:
Rosario, Santa Fe Facts for Kids. Kiddle Encyclopedia.