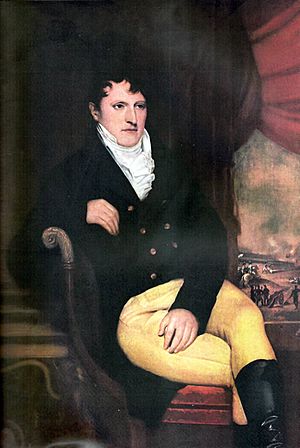 Manuel José Joaquín del Corazón de Jesús Belgrano (3 June 1770 – 20 June 1820) was an Argentine lawyer, general, politician, economist and journalist. He was born in Buenos Aires, Argentina. His parents were Domenico Belgrano Peri, he was Italian; and María Josefa González Casero, she was born in Buenos Aires but her family was from Santiago del Estero. He had 8 brothers and 7 sisters. His children were called Pedro Rosas y Belgrano and Manuela Mónica Belgrano. He studied Laws in Salamanca and Valladolid. He also studied Latin, Philosophy and Theology. He was a member of the

"Primera Junta" and he participated in May Revolution. He created the Flag of Argentina on 27 February,1812. He was a great defender of colonialism and freedom of expression. He fought in the wars of Independence against the Spanish Army. He met José de San Martín, who became Commander in Chief of the Army of the North in January, 1814.

All content from Kiddle encyclopedia articles (including the article images and facts) can be freely used under Attribution-ShareAlike license, unless stated otherwise. Cite this article:
Manuel Belgrano Facts for Kids. Kiddle Encyclopedia.