Diego da Silva Costa (born 7 October 1988) is a Brazilian/Spanish footballer. He plays as a striker for Atletico Madrid and the Spanish national football team.

He was born in Brazil and played for the Brazil national football team for the first time in 2013. However, he then chose to play for Spain. This made the Brazil manager, Luiz Felipe Scolari, very angry. The Brazilian Football Confederation have even asked the country's government to remove Costa's citizenship.

In March 2014, Costa changed to the Spanish national team. This was when he was granted his Spanish citizenship. He made his first appearance against Italy and represented Spain in the 2014 FIFA World Cup.

Costa spent 2 years at Barcelona Esportivo Capela, from 2004 to 2006. After this, he then began his senior career in Portugal by joining Penafiel.

In the same year as joining Braga, he was sent on a loan spell to Penafiel. He played 13 league games with 5 goals.

In 2007, Costa joined Atletico Madrid for a fee of €1.5 million. Unfortunately, he didn't get a games due to loan spells.

Diego Costa remained at Braga in 2007 but on a loan spell. This time, he made 7 league appearances, but he failed to score a goal. In the UEFA Cup, he scored his first goal in a domestic cup against Parma F.C.

He was then loaned to Celta for the 2007-08 Segunda Division season. In that season, he made an impressive 30 appearances and scored 5 goals.

Staying in the Segunda Division, he then joined on loan Albacete Balompie for the 2008-09 season. At this loan spell, he made 35 league appearances and 9 goals.

Costa was bought by Valladoid from Atletico Madrid in 2009 Transfer Window. In this 2009-10 season, he made 34 league appearances with 8 goals. But it wasn't enough to keep Valladolid in La Liga, the top division in Spain. Valladolid was eventually relegated to the Segunda División.

Costa returned to Atletico in June 2010 for an undisclosed fee. Since then, Costa has made a superb 94 league appearances and 43 league goals during his 4 year spell with the club. In his time, he suffered with a few injuries during his time. This include his hamstring injury he suffered near to the end of the 2013-14 La Liga season. 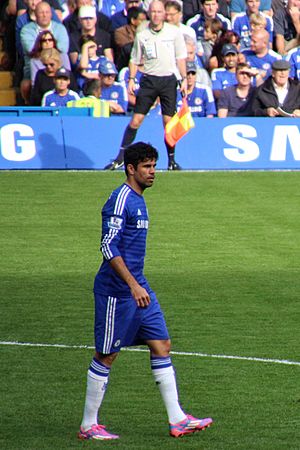 Costa playing for Chelsea against Arsenal

On 1 July 2014, it was announced that Chelsea had agreed a fee with Atletico to sign Costa for a fee of £32 million. He made his first league appearance against Burnley in a game which he scored in for Chelsea to win 3-1.

During his international career, he started with the Brazilian National Team in 2013. He only made 2 appearances with no goals. But controversy was created when Costa was granted a Spanish Citizernship in 2014. Then, Costa adopted Spain as his national side. He made his debut against Italy on the 5 March 2014, Spain won 1-0. Costa was called-up to play for Spain in the 2014 FIFA World Cup. He started for both of the first two games of Spain's torlument against Holland and Chile, but was rested against Australia. Spain lost 5-1 against Holland And 2-0 against Chile. They did win 3-0 against Australia in their final group game, but it wasn't enough to keep them to progess into the knock out phases. Costa is still yet to score a goal for Spain during his time playing as a striker for the national side.

All content from Kiddle encyclopedia articles (including the article images and facts) can be freely used under Attribution-ShareAlike license, unless stated otherwise. Cite this article:
Diego Costa Facts for Kids. Kiddle Encyclopedia.