Smith first entered Parliament in 1970 and, after junior ministerial roles as Minister of State for Energy (1975–1976) and Minister of State for the Privy Council Office (1976–1977), he entered the Cabinet at the end of James Callaghan's tenure as Prime Minister, serving as Secretary of State for Trade and President of the Board of Trade (1978–1979).

After Smith's sudden death in May 1994, he was succeeded as Leader by Tony Blair, who undertook the subsequent re-branding of Labour as New Labour, winning the 1997 general election in a landslide. 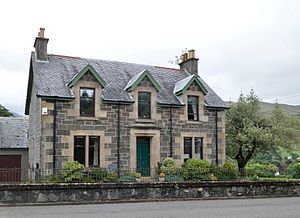 Smith was born at Baddarroch, Dalmally, Argyll, the eldest of three children of Sarah Cameron and Archibald Leitch Smith. At the time of Smith's birth, his father was schoolmaster at Portnahaven, Islay, however two years later he became the headmaster of the primary school at Ardrishaig, Argyll; which Smith went on to attend. From September 1952, Smith attended Dunoon Grammar School, lodging in the town with a landlady and going home during the school holidays, before enrolling at the University of Glasgow. He studied History from 1956-1959, and then Law, from 1959-1962. He joined the Labour Party in 1955.

In 1963, he became a solicitor and then in 1967, an advocate at the Scottish bar, supplementing his income by working as a libel lawyer for the Daily Record and the Sunday Mail. 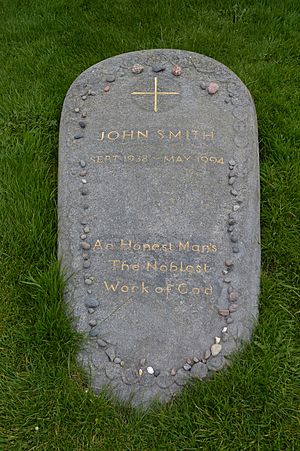 Gravestone of John Smith on the island of Iona, Scotland. The epitaph is from An Essay On Man by Alexander Pope

On the evening of 11 May 1994, with around 500 people present, Smith made a speech at a fundraising dinner at Park Lane Hotel, London, saying "The opportunity to serve our country—that is all we ask". At 8:05 a.m. the following morning, whilst in his Barbican flat, Smith suffered a fatal heart attack. His wife phoned an ambulance and he was rushed to St Bartholomew's Hospital where he died at 9:15 a.m., having never regained consciousness.

On 20 May 1994, after a public funeral service in Cluny Parish Church, Edinburgh which was attended by almost 1,000 people, Smith was buried in a private family service on the island of Iona, at the sacred burial ground of Reilig Odhráin, where many early Scottish and Norse kings are said to be buried.

His grave is marked with an epitaph quoting the Fourth Epistle of An Essay On Man by Alexander Pope: "An honest man's the noblest work of God". His close friend Donald Dewar acted as one of Smith's pallbearers. On 14 July 1994, a memorial service for Smith took place at Westminster Abbey and was attended by over 2,000 people. The Archbishop of Canterbury George Carey gave an address.

All content from Kiddle encyclopedia articles (including the article images and facts) can be freely used under Attribution-ShareAlike license, unless stated otherwise. Cite this article:
John Smith (Labour Party leader) Facts for Kids. Kiddle Encyclopedia.