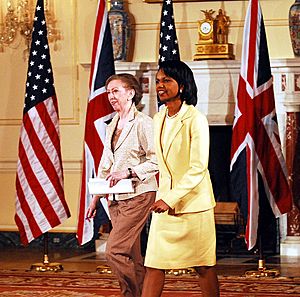 Beckett appears with US Secretary of State, Condoleezza Rice, following her appointment as Foreign Secretary.

Beckett was born in Ashton-under-Lyne, Lancashire. She went to the Notre Dame High School for Girls in Norwich, then to the University of Manchester Institute of Science of Technology.

All content from Kiddle encyclopedia articles (including the article images and facts) can be freely used under Attribution-ShareAlike license, unless stated otherwise. Cite this article:
Margaret Beckett Facts for Kids. Kiddle Encyclopedia.